What a beautiful scene! Whitney picked a lovely wedding spot in the town where I grew up, June Lake, California. Kris, Katie, Rio and I packed up on Thursday and headed south for the most gorgeous stretch of the Sierra Nevada Mountains. We had a great little hotel that had a full kitchen, which was great because we packed a cooler to make the trip a little cheaper! Plus a bit of wine and bubbly 🙂

On Thursday was the Rehearsal Dinner. It was raining a little bit, but the air was fresh. We were pumped to see where whit would be tying the knot and where we’d get to stand by her side! Katie and I look for any reason to wear a dress and had fun getting ready together, it had been a while since we ‘dolled up’ together. We met the guys, who were great, as well as the rest of the wedding party and family.

After the rehearsal, we headed to a restaurant where the parents of the groom hosted a nice dinner, we didn’t stay much past eating, everyone was ready to party! Literally the whole party relocated to the house Whit and Nick rented down canyon, it was gorgeous and with an incredible view of the mountains.

The thing was that the most beautiful places seem to end up on a steep hill. We decided to walk up the hill instead of waiting for Nick to come pick us up but Whit’s hills were hurting her feet so Katie did her bridesmaid duty and offered a piggy back ride. Thankfully, Nick showed back up fairly fast!
[Katie and I had already changed into our comfy clothes, dresses only last so long as we get older–lol] 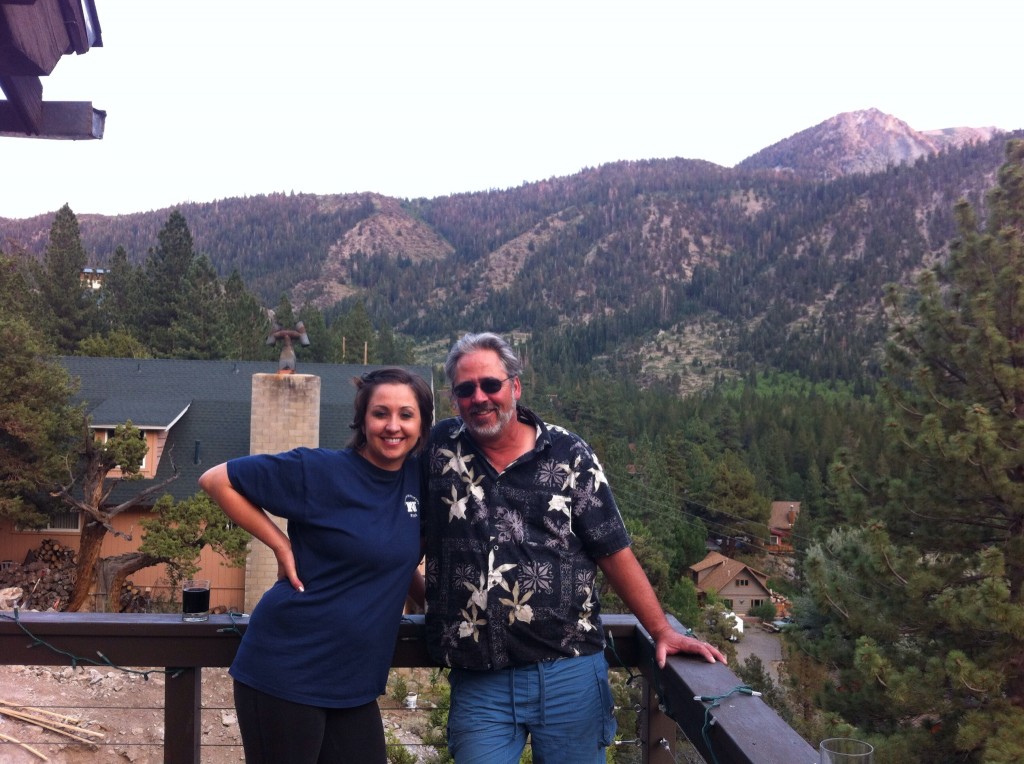 It was really fun to be back here, I think dad really enjoyed it too! Look at those mountains! These aren’t even the huge ones, facing the other way shows the breathtaking ones!! 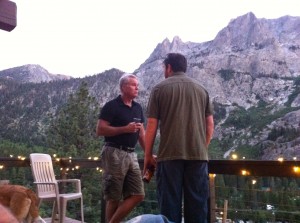 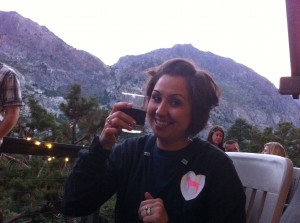 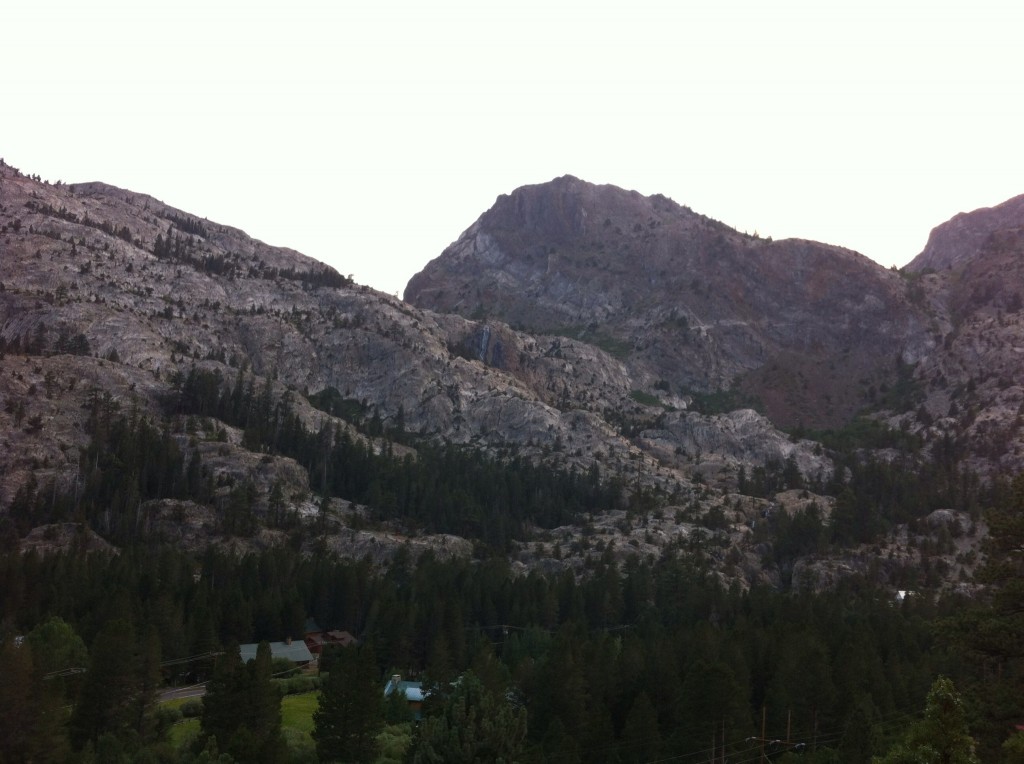 Can you believe that?! Anyhow, we had a fun time being silly and meeting all of Whit and Nick’s most special friends and family (those that we didn’t already know). 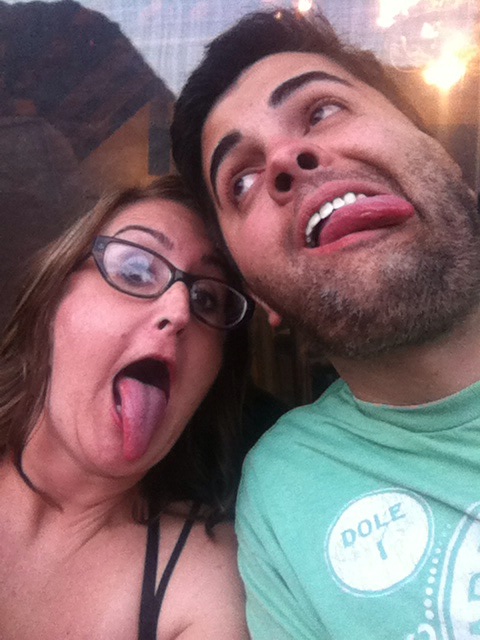 The next day was a free day, we took it easy. Gabrielle came into town from Mammoth and brought pizza! It was a lovely treat to see her!! Cousins are amazing! Except I didn’t get any photos… After hangin with Gab, we met up with Whit and Nick who had rented 3 pontoon boats. We were anchored and tied together out in the middle of June Lake. It was real fun, they had dogs, beer, snacks and music! But it didn’t last long. They had been out on the lake all day, we showed up towards the end of the day and by the time we did, the wind had picked up so we headed to shore.

Nick’s parents hosted another great evening at a park. They had made a bazillion bean and cheese burritos and a bunch of chips and salsa. It seemed like a really practical way to feed a bunch of peeps. They were great! Katie and Kris drank a bit tonight, I really didn’t want to, I didn’t want to have an upset tummy in the morning while we were setting everything up. Since I am an old lady I have to think of things like that.?Eventually, we headed home. Kate and Kris had a fun time (as did I, just not in the same way! ha), and I was happy to drive.

And that was Whit and Nick’s last night as singletons.?They were traditional and slept separately and the boys woke up and promptly left the house to go fishing.

We headed back to our hotel. Kris’ sister Kim and her bf bobby made it to town for the wedding. Kris and the two of them went to dinner at the Tiger Bar, but Katie and I wanted to cruise around town (on foot of course, and with Rio!). So we walked around town and found the candy shop and got some ice cream and said hi to Cathy and Ralph. We walked back to the hotel and had fun chatting and being silly. Katie had been so worried that she’d be sad without her girls, but I think she left her role as a mother at home, and just assumed the role of sister and had an amazing time.

The next morning, we woke up early to try to find coffee in town. You’d think with so many early fishermen, there’d be some cafes open early. We were up by 6 and in need of caffeine. We found a spot that opened at 7, it was 6:45 so we just loitered before getting some coffee and treats. Rio was not a good guest in June Lake, she barked at everyone. By 10 we were at the venue deep in our duties. Table set up, center pieces, bouquets, boutineers, etc. It was all hands on deck! We managed to get everything done by the time the hair girls showed up. By noon, were in our silk robes (gift from whit) getting primped with mimosas!! 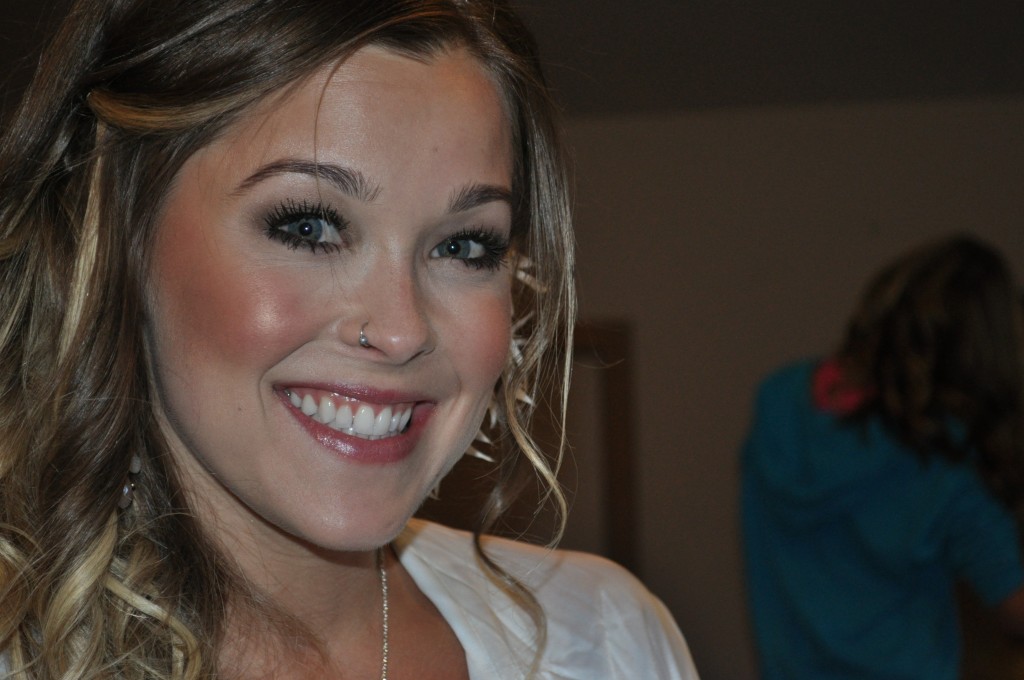 What a beautiful bride! I can’t wait to see all the professional pics!! 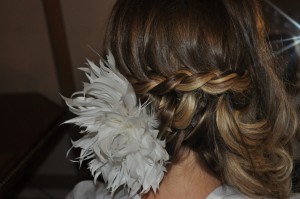 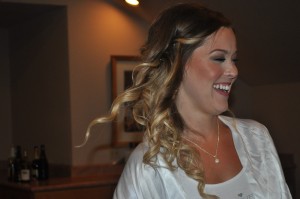 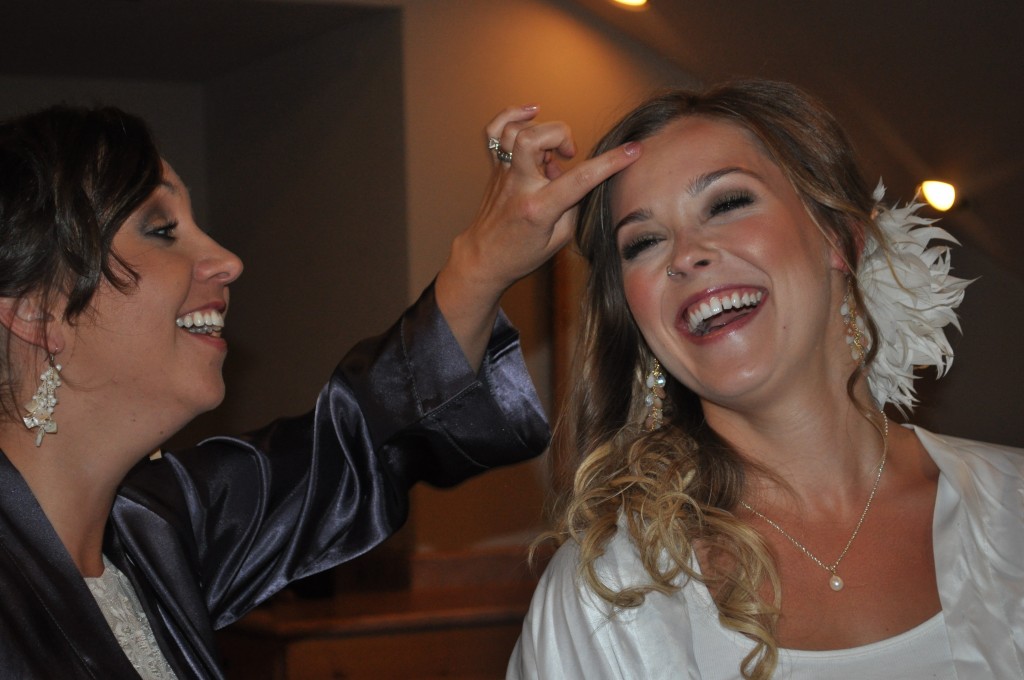 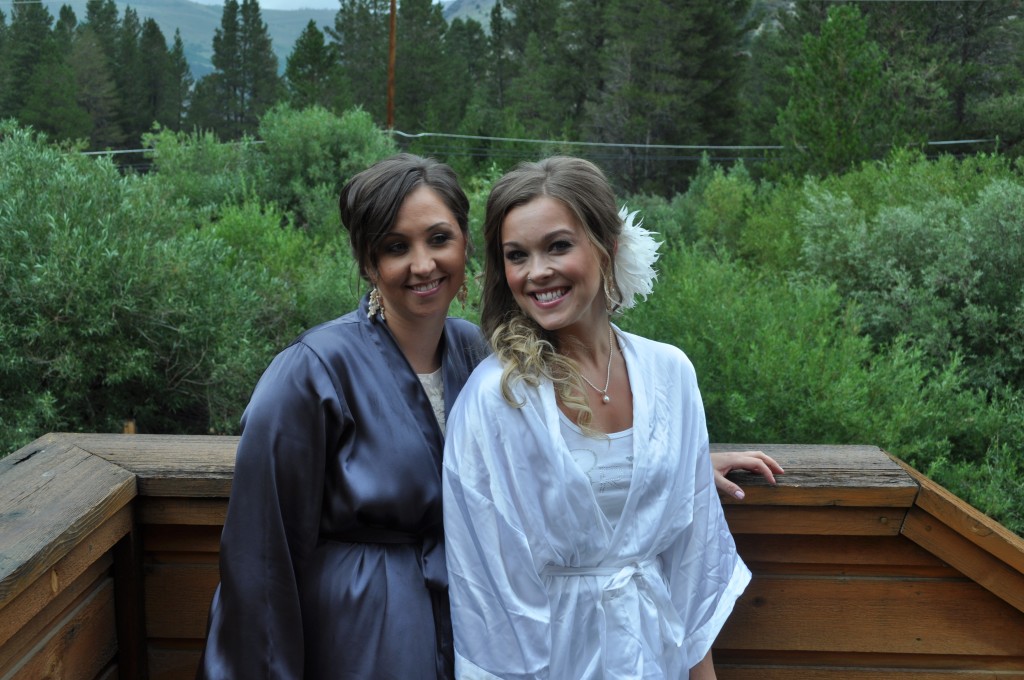 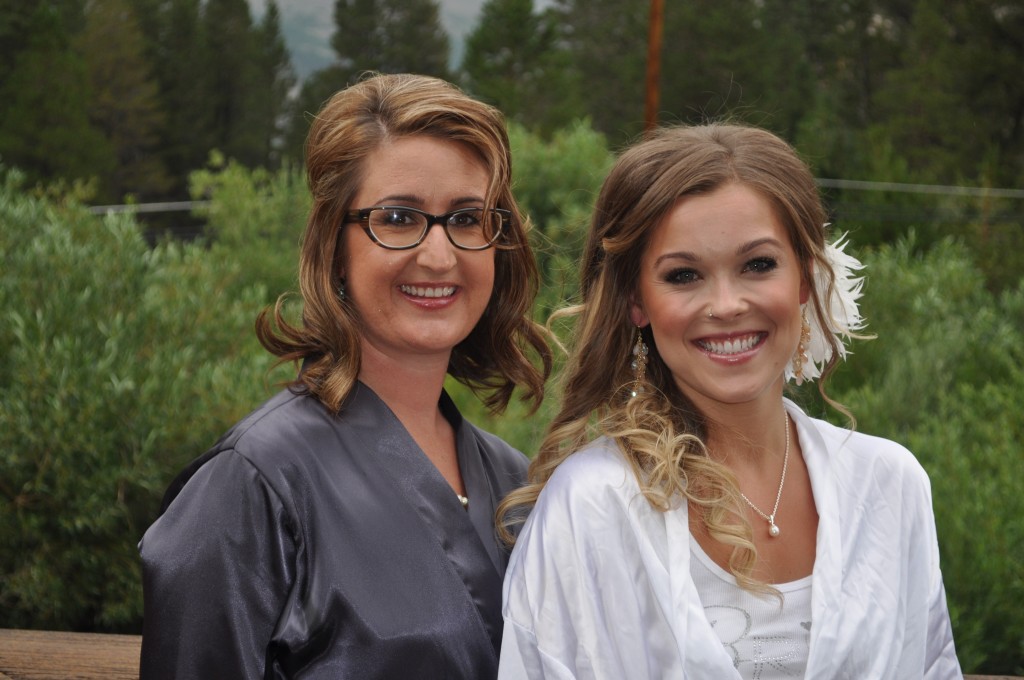 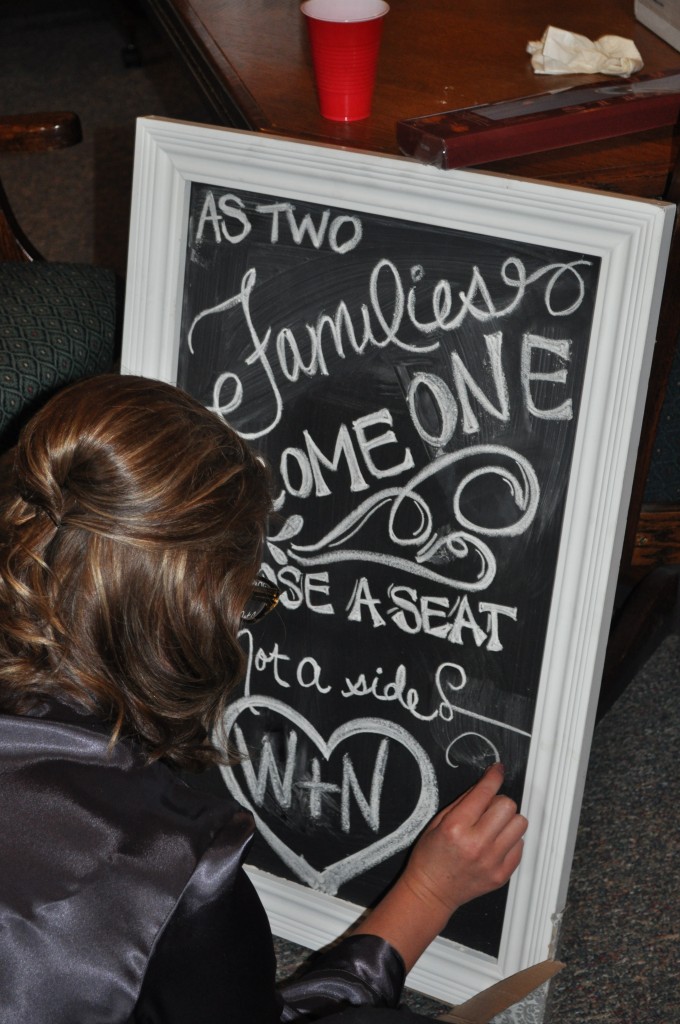 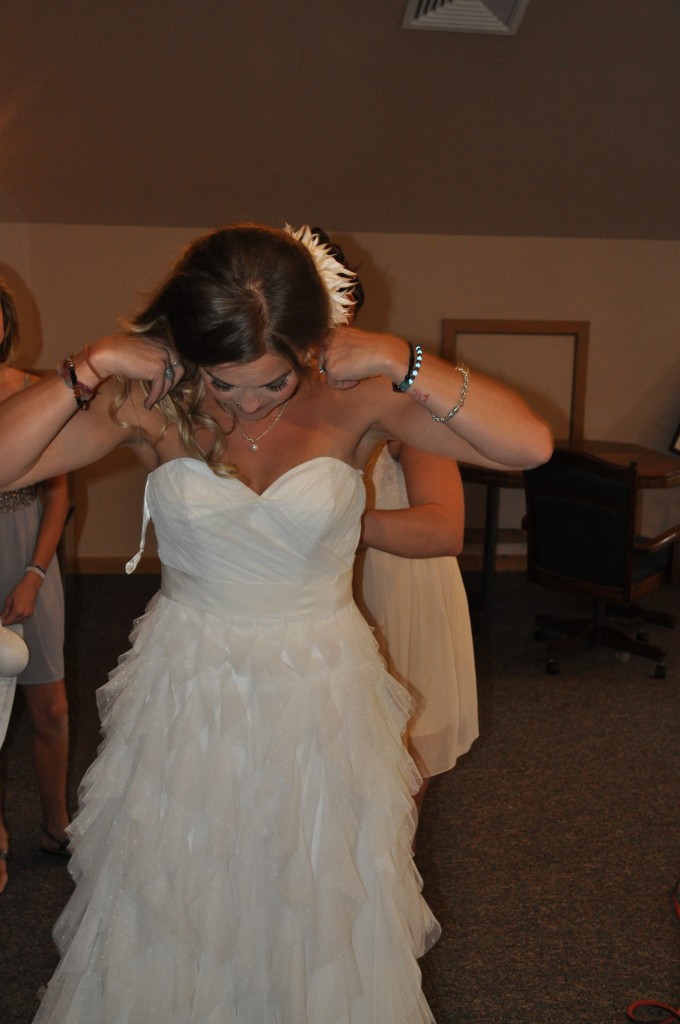 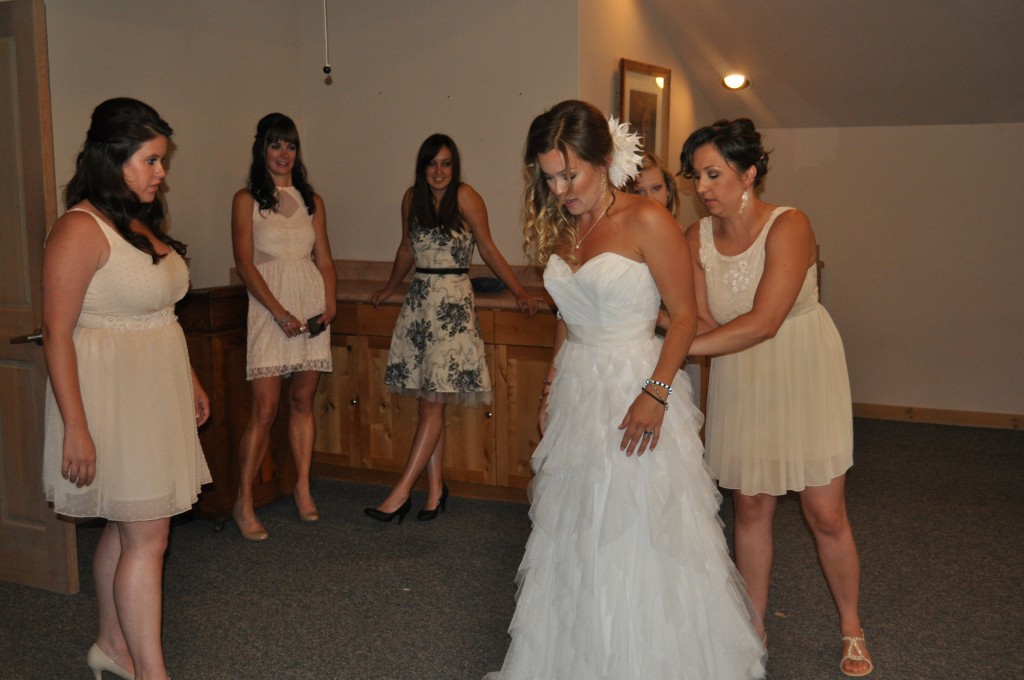 And there she is!
This post has gotten really long! So I’ll post my few wedding pics and just say that the night was phenomenal. The weather was perfect, the sky was blue (no smoke from the fire over the mountain) and we danced the night away. Oh ya, I gave a toast too. I really liked doing that for NiNi! 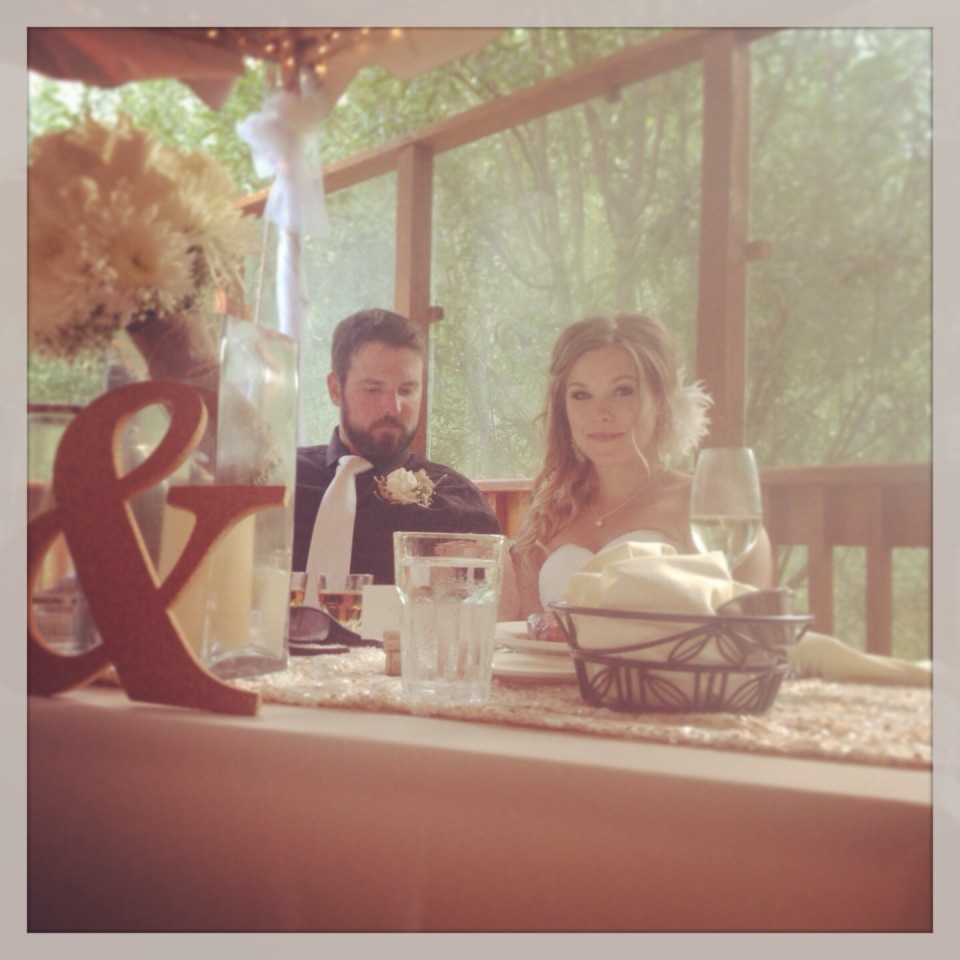 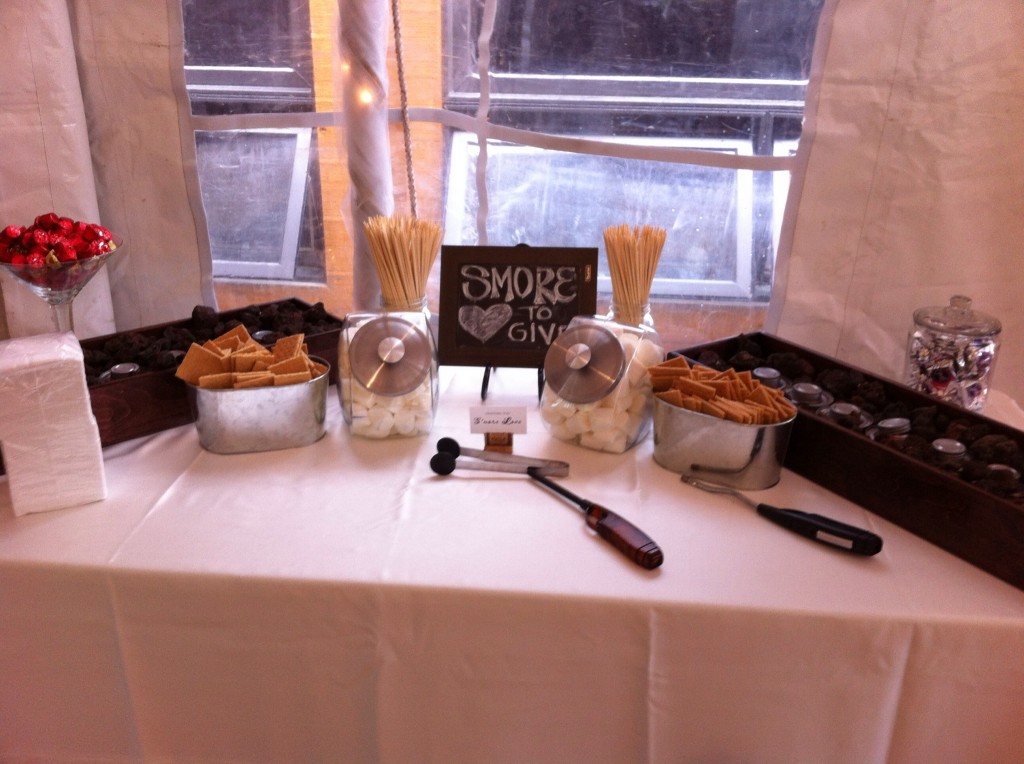 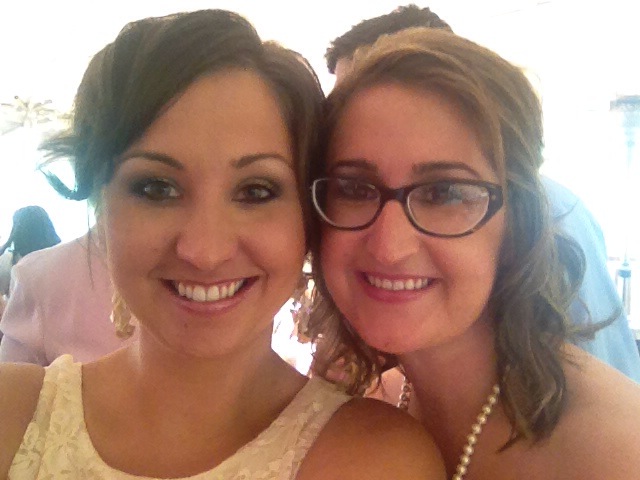 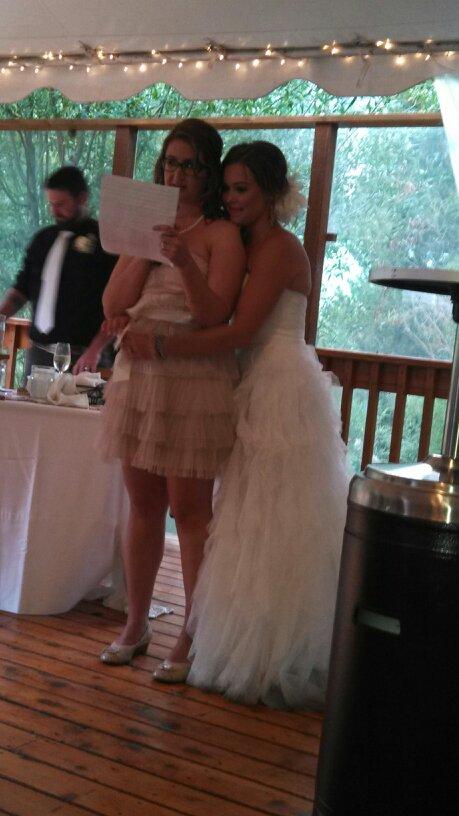 If I have any others from her photographer, I’ll post them. I am so thankful and honored to have been part of Whitney’s most special day. She was a beautiful bride and will be a wonderful wife!

What was really incredible of this day was that after months and months of planning, I really didn’t have to do anything. Our combined vision for the day was executed without any efforts by us. Well, I suppose the one exception was that the ladies didn’t want to hang the stuff from the ceiling. I didn’t blame them! So the boys did have to do that. When I walked into the room, I was thrilled with what I saw! I highly suggest any bride to hire a day of coordinator!

We snapped a few more photos with Evan down at the site. We were on cloud nine, so excited to get this part of the night on the way!

Our reception began with a bang! The DJ was getting ready to announce the wedding party when the wedding party found the props from the photo booth! So we all made an entrance with funny costumes on. The wedding party walked into “We are Young” by FUN, and we walked in to “Home is wherever I’m with You” by Edward Sharp and the Magnetic Zeros. It’s moments like that that I wish we did hire a videographer. But the photos captured things pretty well!

Once we were announced, we were invited to be the first to go through the buffet line. Wow, that was nice! I guess that wont ever happen again!! It’s not often that you are the guest of honor, we definitely enjoyed it!

The food really was exceptional. We missed the cocktail hour but the Cassie and Pattye saved me a deviled egg and crab cake. They tasted just as amazing as at our tasting with Brooke.

Dinner was followed by toasts, first dances, a slide show, and cake cutting. The 4 that gave toasts: Maid of Honor (Katie); Best Man (Erin); and both fathers. They all said the most heart felt and kind words. Of course, Erin’s speech was a bit more of a roast than a toast and people thought the speech was terrible, but I guess since I know the nature of his relationship with Kris, it was just more funny and expected to me. Ha

The next are self explanatory 🙂

After the formal stuff, dancing began and everyone had fun. The photo booth was a hit as was our un-manned bar. Someone snuck in hard liquor which didn’t seem to have an impact on the drinkers so that was great.

The Marie Callendar’s Crew is still together (below)!?

What a beautiful little sister I have!

The photo below is a special one, these are all ATO brothers, including Kris’ grandpa.

I have no words to end this entry. The night was amazing but that doesn’t even sum it up! So I’ll leave it at that.

Wow, I can’t believe it is already almost February 2013! The wedding is already so far behind us. Kris and I had the most amazing time at our wedding, and if I do say so myself, we threw a pretty awesome party! Everyone said how fun, nice and comfortable the wedding was and also complimented the food….non stop! A tip of the hat to our fantastic wedding planners, Cassie and Pattye at Take the Cake Events, as well as to Brooke at The Devine Plate. They were amazing!

Well, I’ll get right to it. We had a nice morning getting ready at Camp WeChMe. We had a make up artist, but everyone helped with doing our hair.

The girls and guys all helped Kris and I to get ready and look our best. We were looking forward to the “First Look” where we would see each other for the first time. It was a really nice moment, and we were happy to have it before the ceremony.

After the photos of us, we did some photos with the wedding party, it was fun, except the girls had a tough time on the slope of pine needles in their heels…. [oops]

We were now calm and collected and ready to exchange our vows in front of all our friends and family. The day was perfect, though the morning had been cold. The clouds were non existent and there was just a very light breeze, enough to keep everyone cooled off. I felt terrible for the boys in their suits!

I loved the pine cone idea that Cassie and Pattye had. They went perfect with our rustic theme and were the perfect way to add a splash of color!

Our ceremony was nice, and didn’t take too long (I know people can get bored!). We had some nice readings from Native American literature, plus a pause for the string trio to play Blackbird by the Beatles, we read our favorite quote from the Notebook and nailed a box my dad made with love notes to each other and a bottle of wine for us to open on our 10th anniversary. I wasn’t able to get through the vows without some tears, the boys over Kris’ shoulder were making funny faces at me too! After the ceremony, we had some more photos which included all family and the entire wedding party. It took a little more than an hour, while our lucky guests were at the Fish Hatchery enjoying some delicious appetizers and refreshments!

Our combined family is pretty large, we are very lucky to have so many wonderful people in our lives.