We made a half day pit stop on the train from Valladolid to Madrid in Segovia at Diego’s suggestion. He had lived there for a while for his military training, or maybe it was officer’s school or something. Anyway, he loved the town and really wanted us to see it so he helped us exchange our tickets. I am glad we took his advice, it was a lovely town, and he was (as expected) a great tour guide. He was able to ride the train for next to nothing with his military ID. The town is extremely old with lots of neat buildings. The town is known for its aqua-duct, apparently the largest one? or maybe the first one? Here is a photo 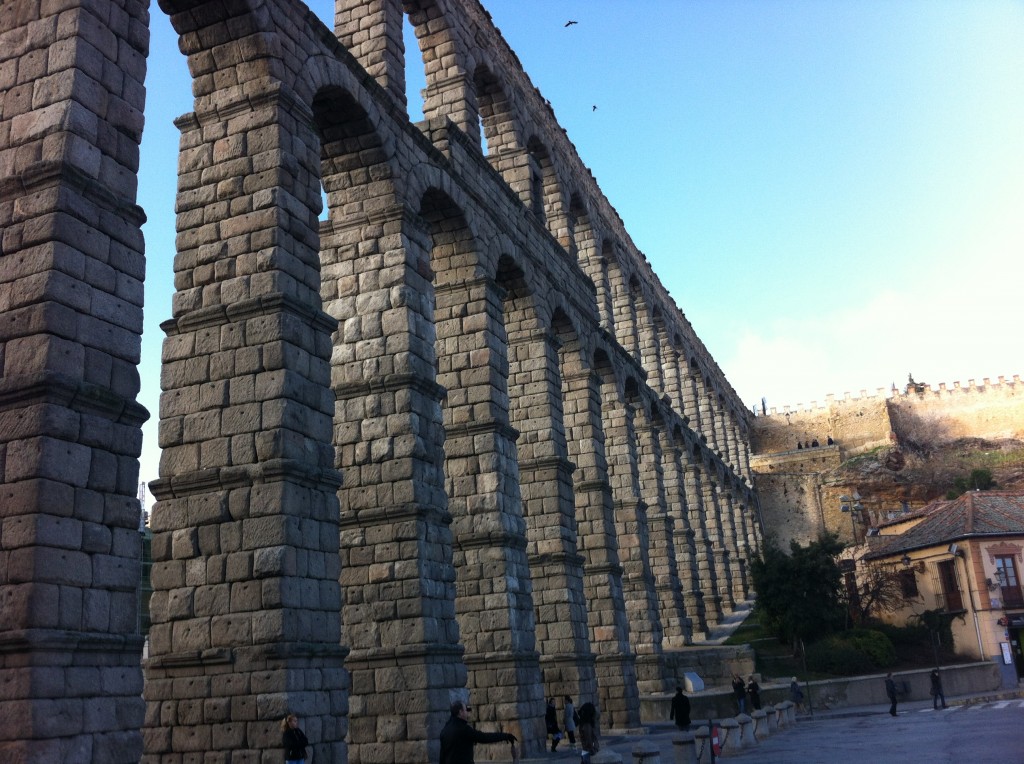 The ancient part of the town was really neat too. Cobblestone streets, old buildings, churches, castles…. its like walking backwards in time. The funny part about our little mini trip here was that we had our luggage and Diego was sure the train station would have a place to hold it, but they didn’t. So that was a little bit of an adventure. We ended up dragging the bags up a long hill to a bar where he knew the owner. The bar was attached to a hotel and they held the bags for us, reluctantly. We went and had a few drinks (beer for the boys and wine for me) and enjoyed some tapas. We liked Segovia because all of the bars would give you two snacks for free with each drink you purchase. Pretty neat! This was how we ate lunch, but by the end, I was a bit buzzed and ready for a nap. I think I slept on the train. 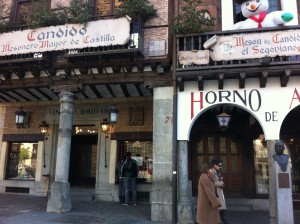 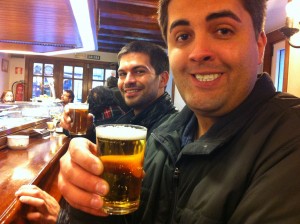 After some snacks, Diego wanted to take us to one of the large churches, wow, it was huge! I was walking inside, staring up at how huge and beautiful the architecture was and tripped and fell over some kneeling place. It really hurt! When I came back home to Reno, the bruise was still there. I didn’t cry, I was tough. 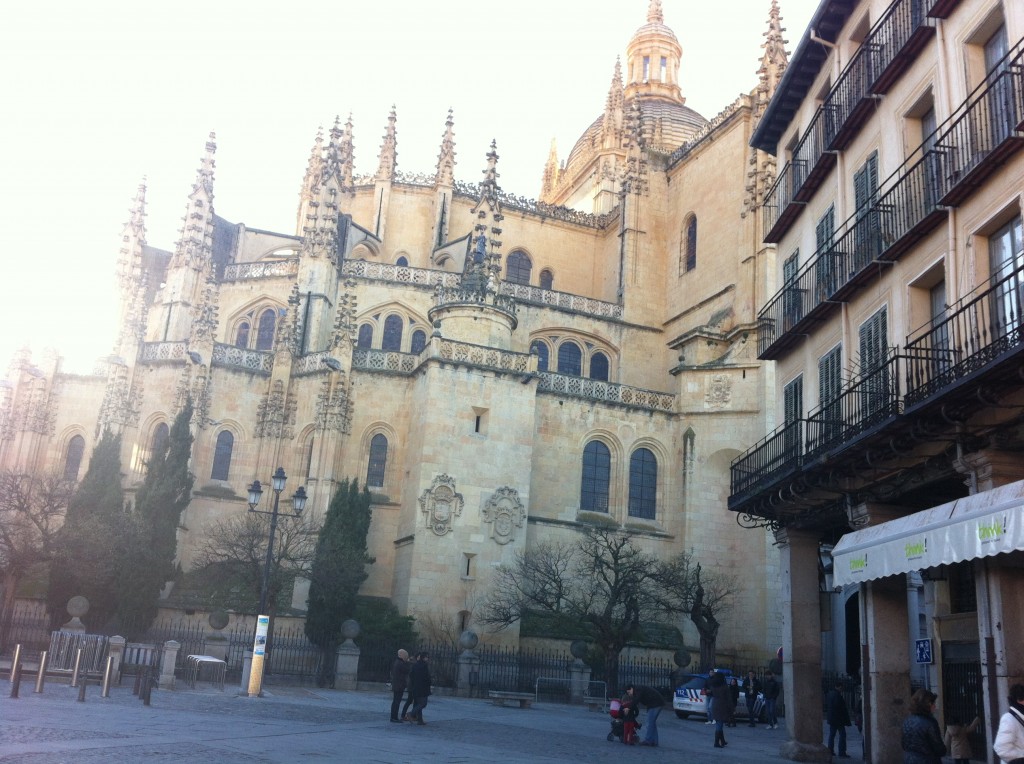 Next we went up a pretty steep hill to a castle. Diego says it is the castle that the disney land (cinderella) castle is based on. It was gigantic and we were able to tour the whole thing. It was amazing to walk through something that seemed like it only existed in history books or documentaries on TV. 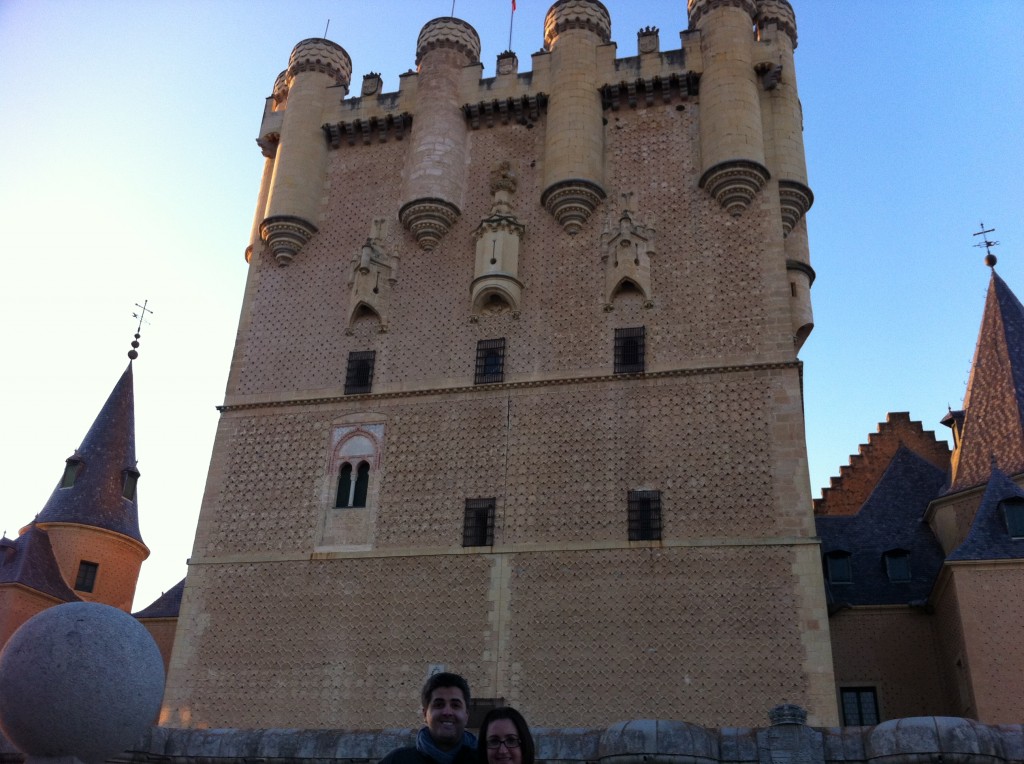 This was just part of it, it was nearly impossible to get the whole thing, but there we are at the bottom! Recognize those pointy and rounded things from disney?

At the very top of the castle there is a nice large area. There was a really steep round stair way to get up there, I have no idea how men in armor made it up there in a hurry. Though, the castle seemed pretty safe. There was a really deep trench around it, maybe there was a moat previously?  And it was literally at the top of a hill so I think they were pretty safe. Here we are at the top! 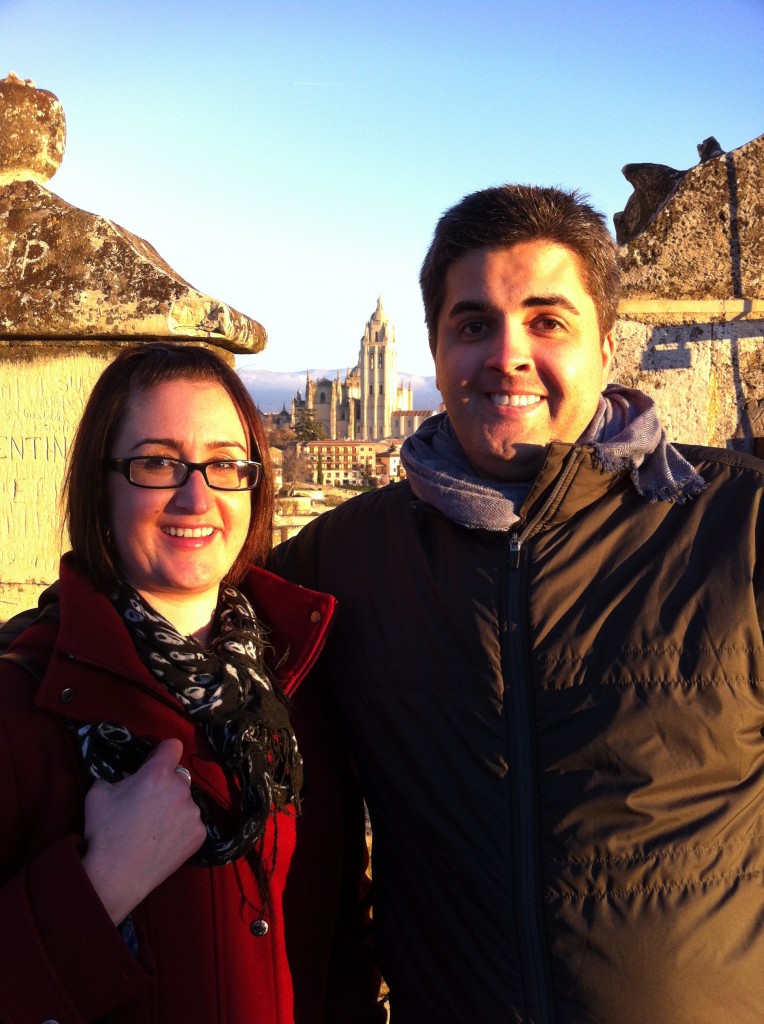 Right behind us is that castle where I fell and hurt my leg! Up at the top were large cannons. Again, it is still amazing to see how people lived so long ago. Likely it isn’t as surreal for europeans because they are surrounded by these relics, but in the youthful USA, we just don’t see such old stuff. Back when people were living in this building, the word American didn’t even exist.

Here we are inside the castle with a few friends: 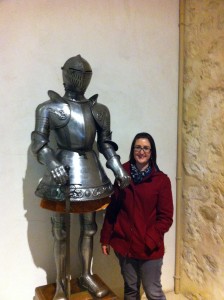 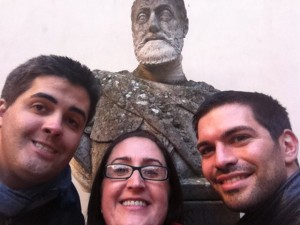 Overall, I really liked Segovia! I think it would be really fun to see the place at night during the summer. How fun to stay at a little hostel up one of those narrow streets and go to all those little bars for tapas and tinto! We will have to go back.