I was actually really excited to get to San Sebastian because it would be the only part of our trip where we are in a hotel. We were very fortunate to have had somewhere to stay everywhere else but were really looking forward to, well…maid service!

We made a nice, last minute hotel reservation. I think we were lucky considering we would be there for New Years Eve. We arrived after a night in Madrid where we again went to dinner with Pablo and met his parents and brother. I really enjoyed that.

It was mid day and we were happy to be in San Sebastian.

Turns out our hotel had an ocean view! We took a litte nap after finding somewhere to eat. We met Patricia for dinner and had a really nice time at a fancy basque restaurant. I loved talking with Patricia. As the Resident Director of our flagship program site, she had lots of insight and stories about the company I work for and how it began. She had been with Carmelo from the beginning. Dinner was excellent, as was the company. She showed us around the ‘old quarter’ where she said we should go tomorrow night for New Years eve. It was really nice down there.

The next morning we found our way to the bus station and got on the early bus to Bilbao to see the town and visit Ibon. We made it there by about 10:30 and used the tram to meet him in front of the Guggenheim museum. It was neat to see the museum that I had seen so many pictures of from students. 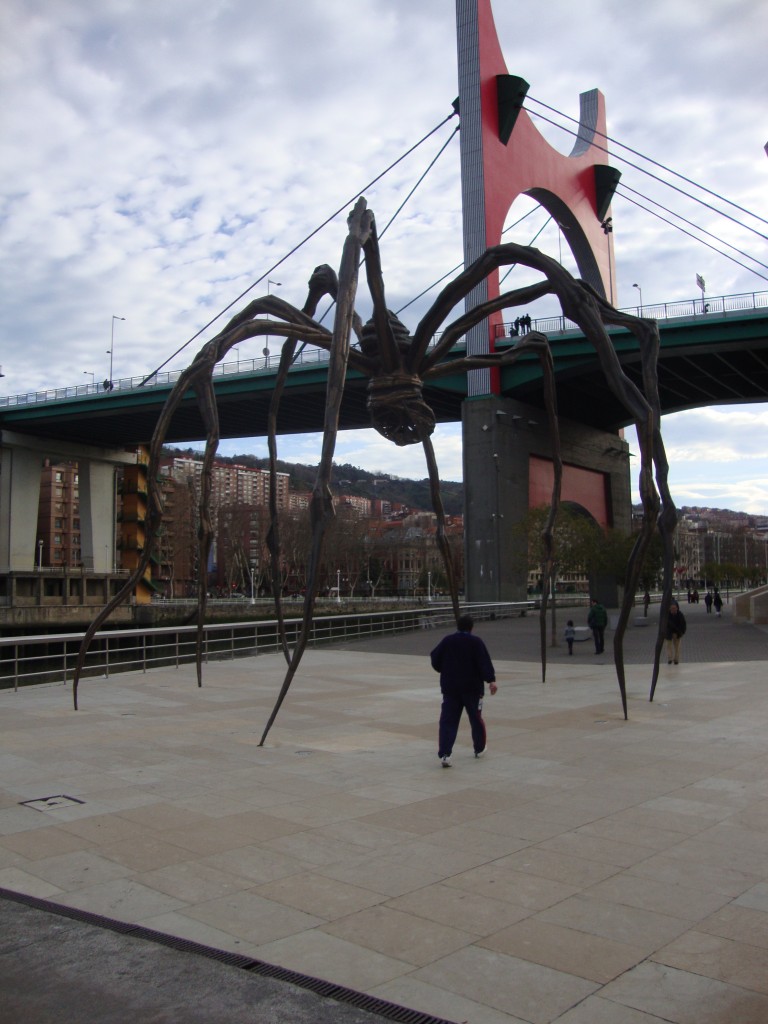 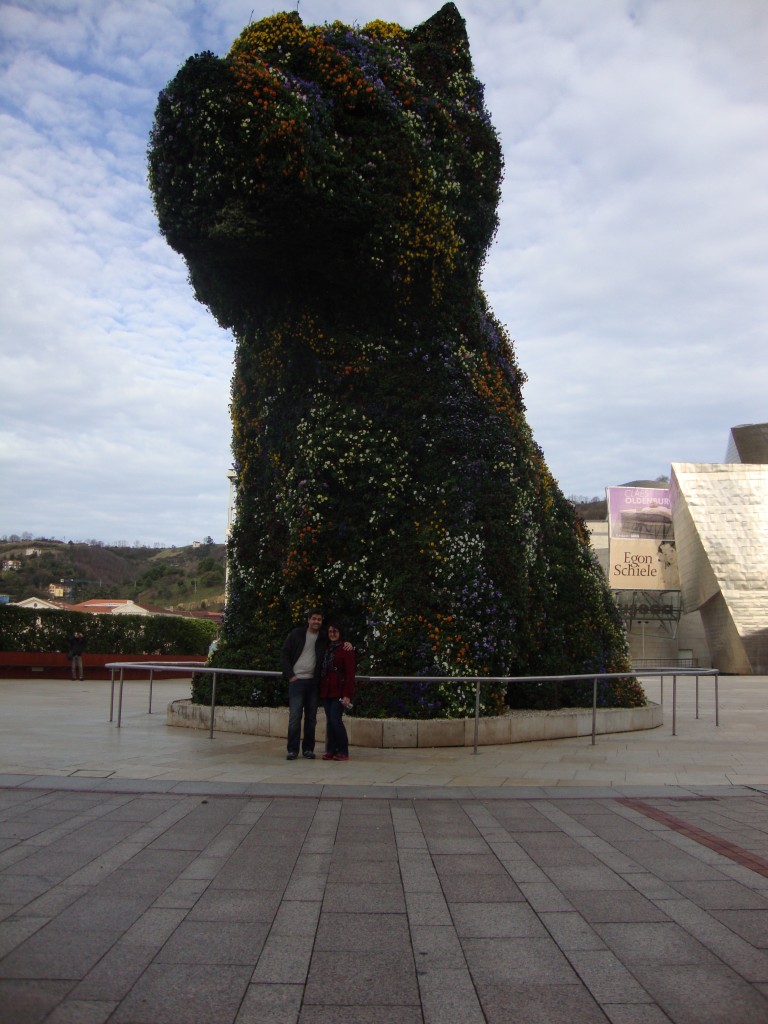 Luckily for Kris, the museum was closed. The outside was still pretty spectacular. He walked us all around town, telling us stories of how the industrial town was transformed after Franco. Its a pretty neat story! The town is actually really beautiful. In fact, much of the architecture reminded me more of New York than what I had seen in Madrid. We went for coffee at a place near the museum. At that time, his son Xavier was with us. He was really cute, riding around on his little scooter. Then we went to his house which was downtown across from the campus. Xavier stayed there and we went out to lunch. We had some traditional basque stuff like stomach, octopus, and a few other things that seemed pretty exotic. I liked it all. From there we walked more and then found a neat place for some dessert. We had a custard like pie, it was glorious. And of course, we had coffee. 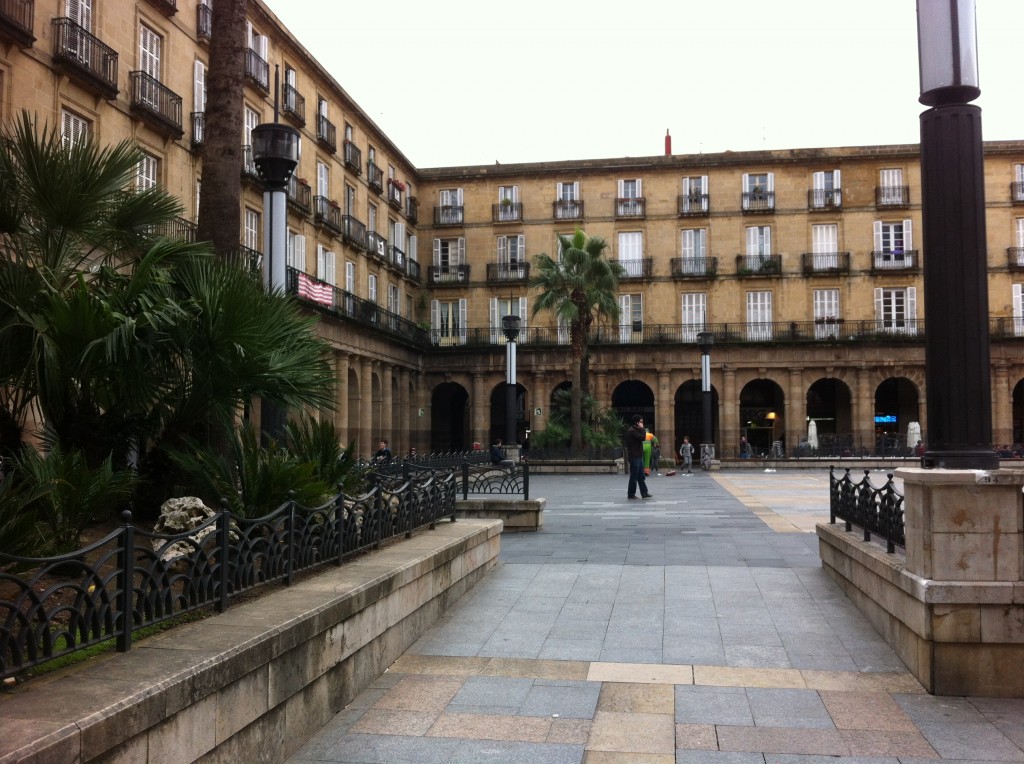 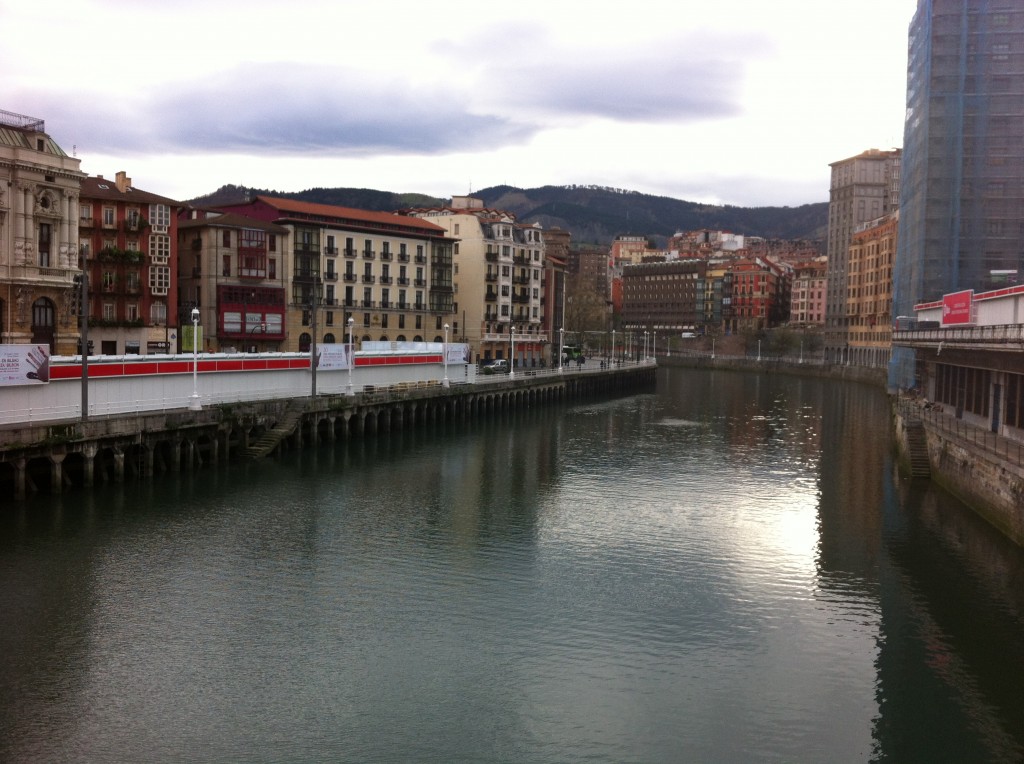 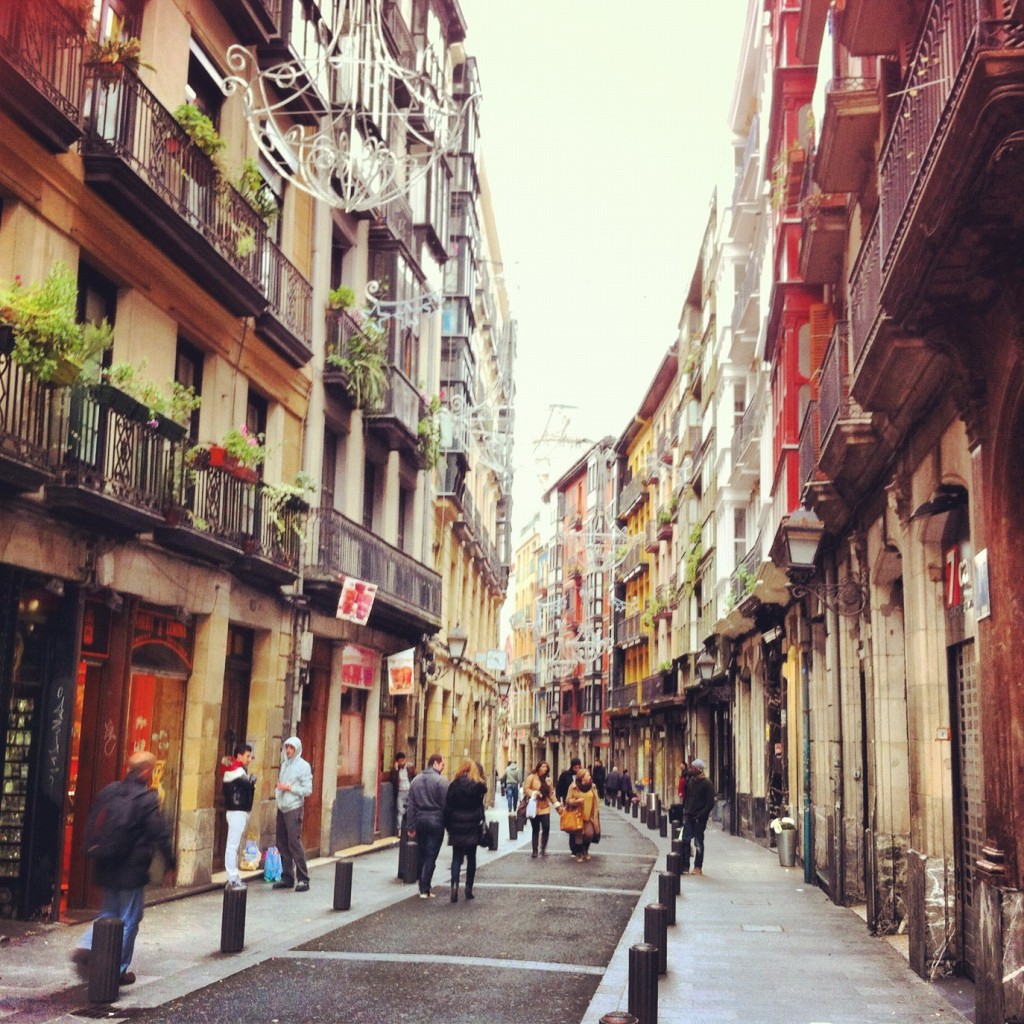 After nearly a full day with Ibon, he had to leave for some dinner plans. Our bus was at 7:30 so we did a little shopping, including buying some champagne and some grapes from El Corte Ingles (a really popular department store that has grocery–I want one in Reno). I will skip a small story where I had some stomach issues and leave it with me wanting a really light, not exotic dinner once we got home to San Sebastian (insert crooked face here).

Back home in San Sebastian, it had started to sprinkle. I had my tummy issues and was torn between going out, and getting some rest. After all, it was the first time we didn’t have plans with anybody. Talk about keeping ourselves booked! But, at the same time, it was New Year’s Eve and what a wonderful place to ring in the new year! If you know us at all, you might have guessed it right, we stayed in. We went and got some Kabbob like in Alicante and enjoyed our champagne on our hotel bed. We woke up at midnight from all the screaming and fire crackers going off around town. The partying below us and all through town was still going strong when I woke up around 7am. By 8am, it was pouring rain, forcing everyone to go in doors. We walked over to a little shop and had some coffee and croissant (our favorite, and why I came home 5 pounds heavier). We had another bottle of wine from our trip to Bilbao so we bought a big baguette. We went back to the hotel and drank wine, ate a loaf of bread and watched it rain. 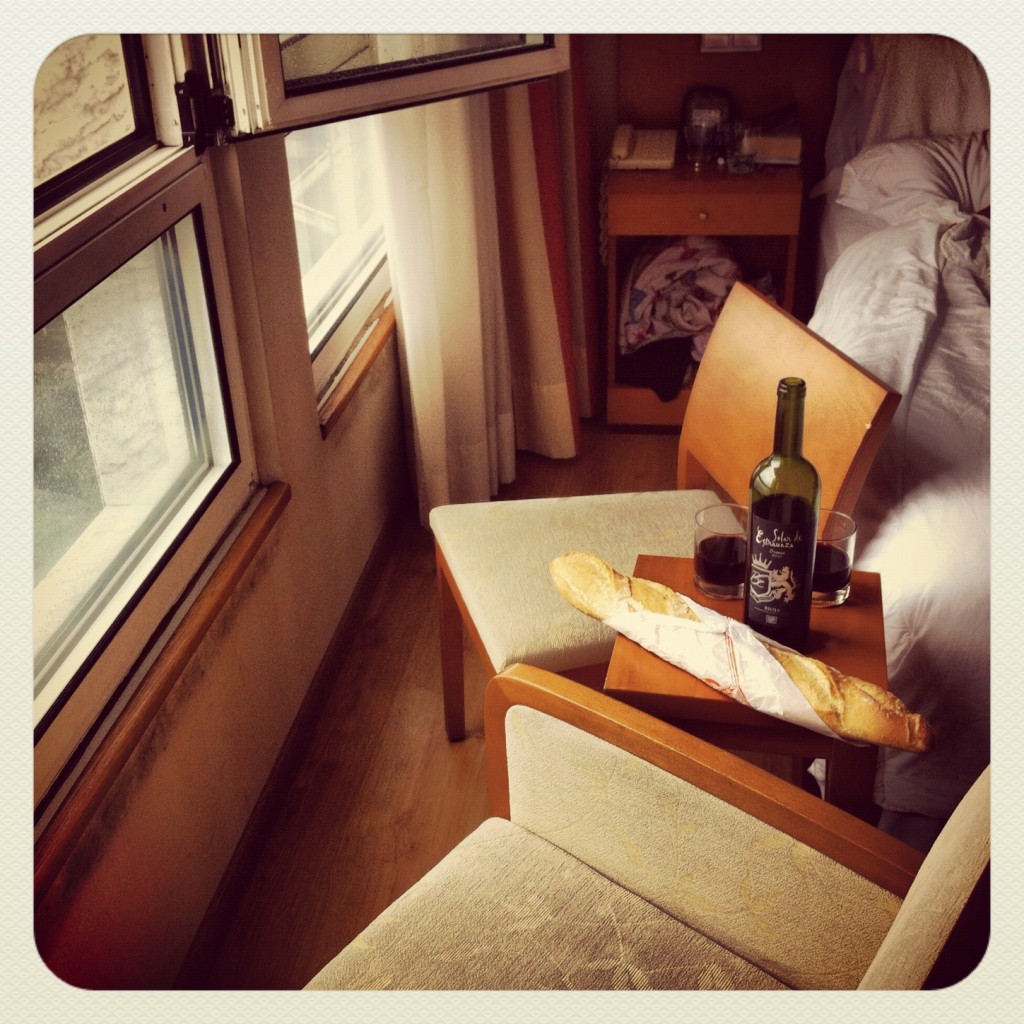 It was awesome. We stayed in doors all day on the first day of 2013. Even though we knew we were missing out on exploring San Sebastian, we really liked our ‘day of rest’. The next morning we went to the university and met Patricia again. She and I talked about work stuff and she showed us around a little bit. The day was still a little soggy, but the sun was coming out making the air warm and humid.

We walked from campus down the beach to go find the wind combs I had seen so many times before in photos of the program site. It was getting cloudy again so it was a humid cold wet air, it was while we were walking along the beach that I realized I was getting sick with a cold. I was pretty sad. 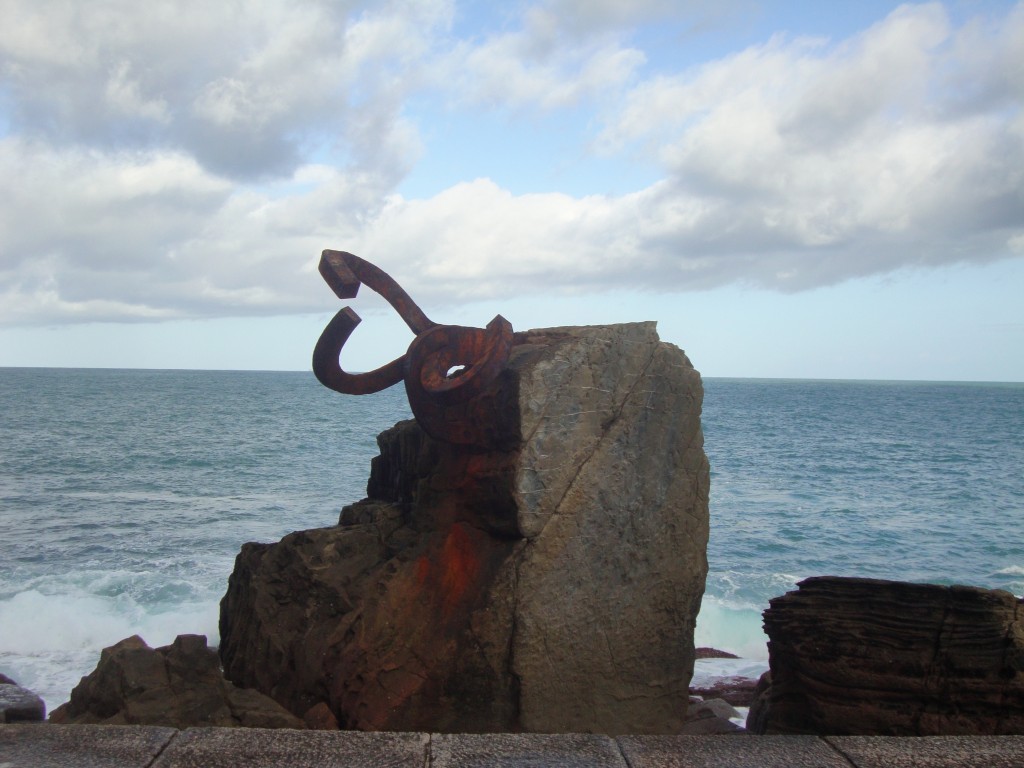 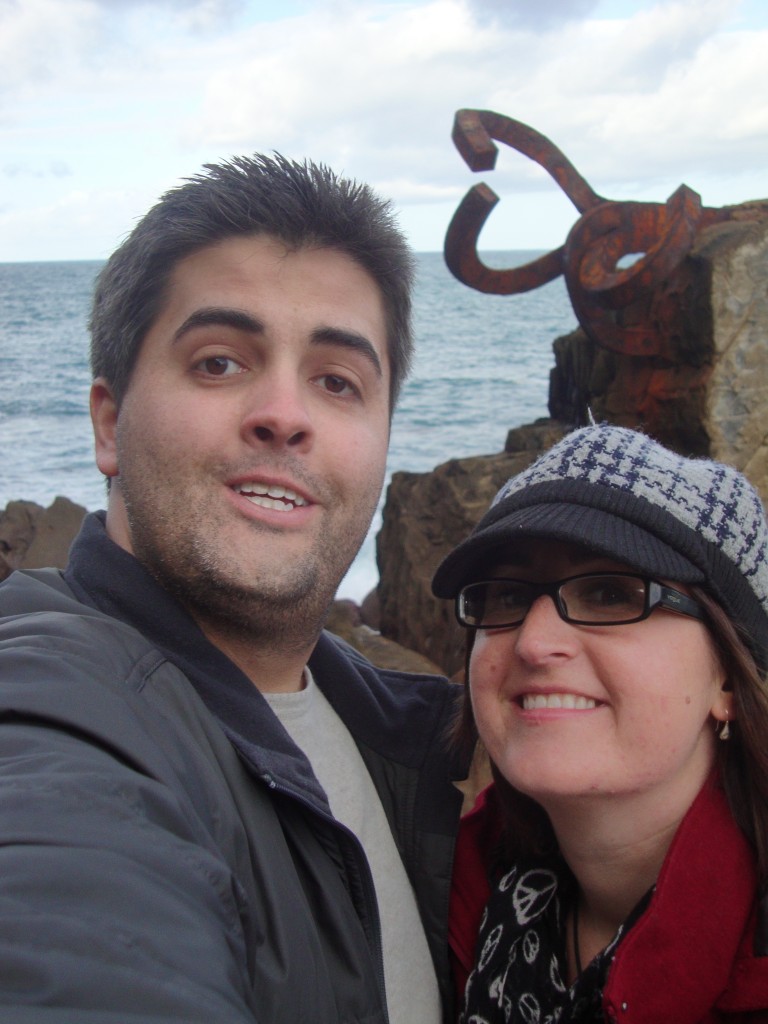 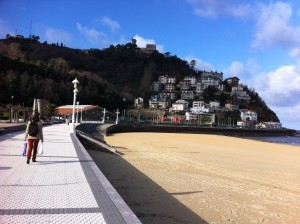 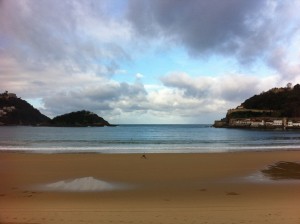 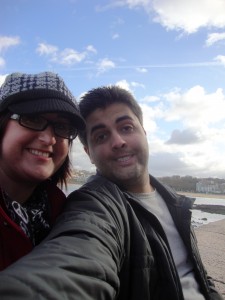 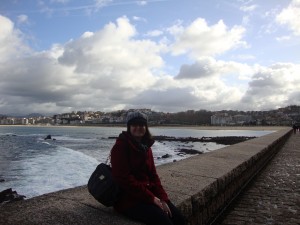 Really, this was the last part of our vacation. We had a few days till we got home, but it was mostly travel. From here we took a 5 hour train back to Madrid, stayed the night, woke up the next morning, caught a flight to London, stayed overnight there, woke up the next morning and flew to Las Vegas, then to Reno. Being sick at the end of the trip wasn’t the best thing to happen but we made it, regardless.

Our honeymoon was such an incredible trip. I love Spain even more than I thought I would. I love the way they live, just like I really appreciated the way the Costa Rican’s live. I’d like to spend more quality time in other places because I think with each trip I’ll adopt subtle different ways of life and incorporate them into our own household and lifestyle. If I’ve learned one thing, and one thing only, it is that there are lots of different ways to live. The American way is not the only way. Here’s to seeing lots of other ways to live!