Back in 2012, Kris and I were engaged to be married. The housing market was bleak but prices were low. We wanted to find an old fixer upper in our favorite part of Reno, the old southwest. This neighborhood is full of gems as well as not so pretty stones just waiting to be shined up. We found Plumas and bought it in April before our wedding upcoming in September. I remember this month distinctly. My niece Danell was born, my boss left and I was asked to take her place on an interim basis and we were really getting going on wedding planning. We had a busy summer ahead and moving into a place that needed so much work seemed daunting. But we were too excited to turn away from it, there was so much potential! So begins our story of Plumas.

To say that Plumas needed a little work was an understatement. We thought that besides some bathroom upgrades, that we were mostly looking at floors and paint as the main things needing done. However, beneath the paint were extremely dirty walls that had cracks, holes and were plaster so before paint, lots of repairs were needed. The day we moved in we realized the water heater was broken and the fridge was not functional–so there we were on our first morning loading up a new [tiny] fridge and water heater at Lowe’s.

We decided to live in the basement and begin fixing up the upstairs and then slowly move upstairs. This sounded very logical and possible. Someone should have reminded us that we were paying for a wedding at the same time!

The first project we took on was what would hopefully become our office. 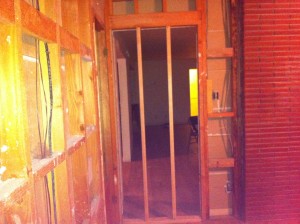 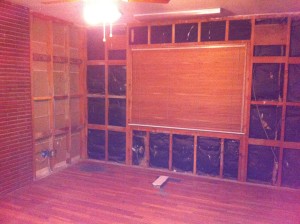 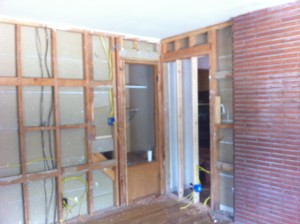 My dad was kind enough to help Kris re wire all the electrical which was great because it was pretty old and we planned to have both our computers and who knows what other devices pulling power from the same space. Originally there were two entrances to the room, one from the living room (beside the fire place) and from the opposite side off the kitchen. We closed off the door way so that there was not a door right by the fire place. Unfortunately, we never really ended up making this room into an office so I’ll go ahead and share the final pictures of the room from when we sold it. New walls, new electrical, new lighting, refinished floors, new baseboards, new blinds and window casing. With all this natural light, it will be a creativity inspiring workspace for someone, someday. So to re-cap: 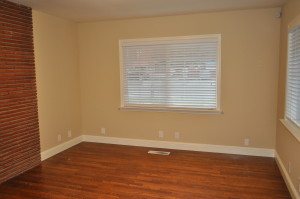 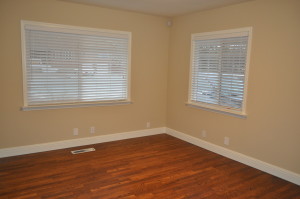 So where to next? Our next project was the basement. We had been living down there for a while at this point. We didn’t ever really unpack or settle in. We just had the basics assuming we would be moving in to the upstairs but as time went on, it was seeming less and less possible. So I begged Kris for (what I thought would be) an easy and quick weekend remodel. I was thinking we should paint the wood paneling, pull up the carpet, stain the concrete and put in new base boards. Not so bad, right? WRONG!

When we pulled up the carpet, we found a wild surprise: Mismatched vinyl tile flooring that made no sense. Where we first pulled back the carpet was just red and black, as we exposed more, there were tons of colors, from brown to yellow, to teal! What were these people thinking? So when we realized that removing the tiles meant scraping up glue, we knew we wouldn’t get a nice smooth concrete floor to stain and seal so we found some tile on clearance and decided to go with a ceramic tile that looks like hardwood. But why would we put in a new floor with wood paneling and acoustic tile ceilings? So our weekend renegade idea turned into a complete floor to ceiling gut. New sheetrock on the walls and ceilings, new recessed lighting, new floors, new baseboards and fresh paint! While I was terrified of the cost, I was so excited for a new space to actually be comfortable in instead of scared of. Here is the progression from start to finish. 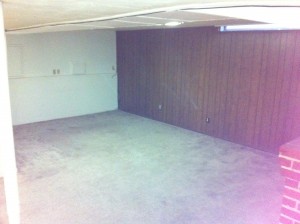 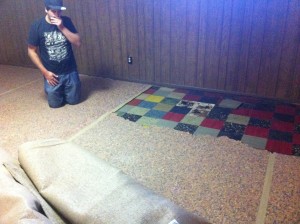 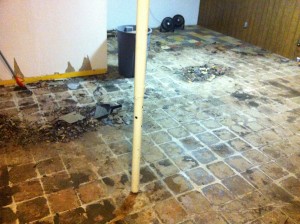 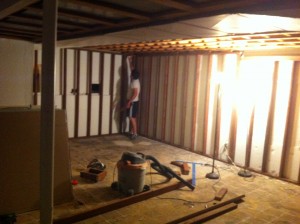 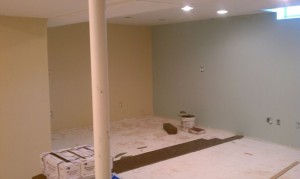 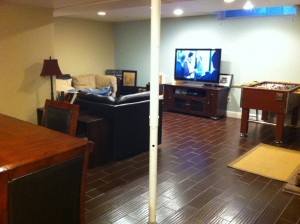 So this is how we enjoyed it while we lived there. Once we moved out and did our final touches to the two rooms down there (just new carpet, paint and base boards), it ended up like this: 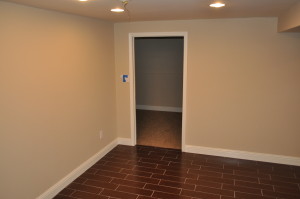 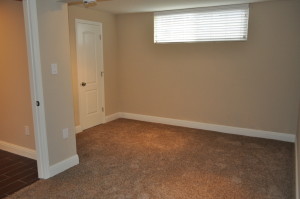 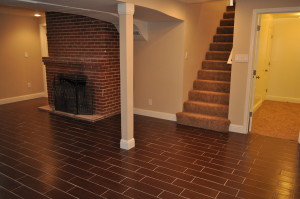 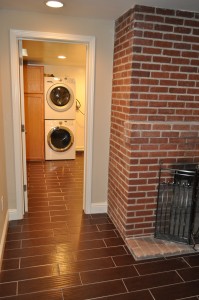 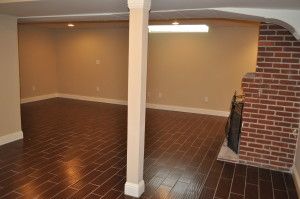 It really is a lovely space for a basement with hardly any light. With all the light Kris added, it might as well have huge daylight windows.