This year, the whole family went to the Great Reno Balloon Races for dawn patrol and the mass assertion. I am actually pretty excited for next year because I think Hugo will be more interested. Hugo wasn’t the biggest fan of waking up at 4:30 am. He started out perfectly chipper and sweet but by 7:30, he was in need of a nap which he got when we decided to head home right then. 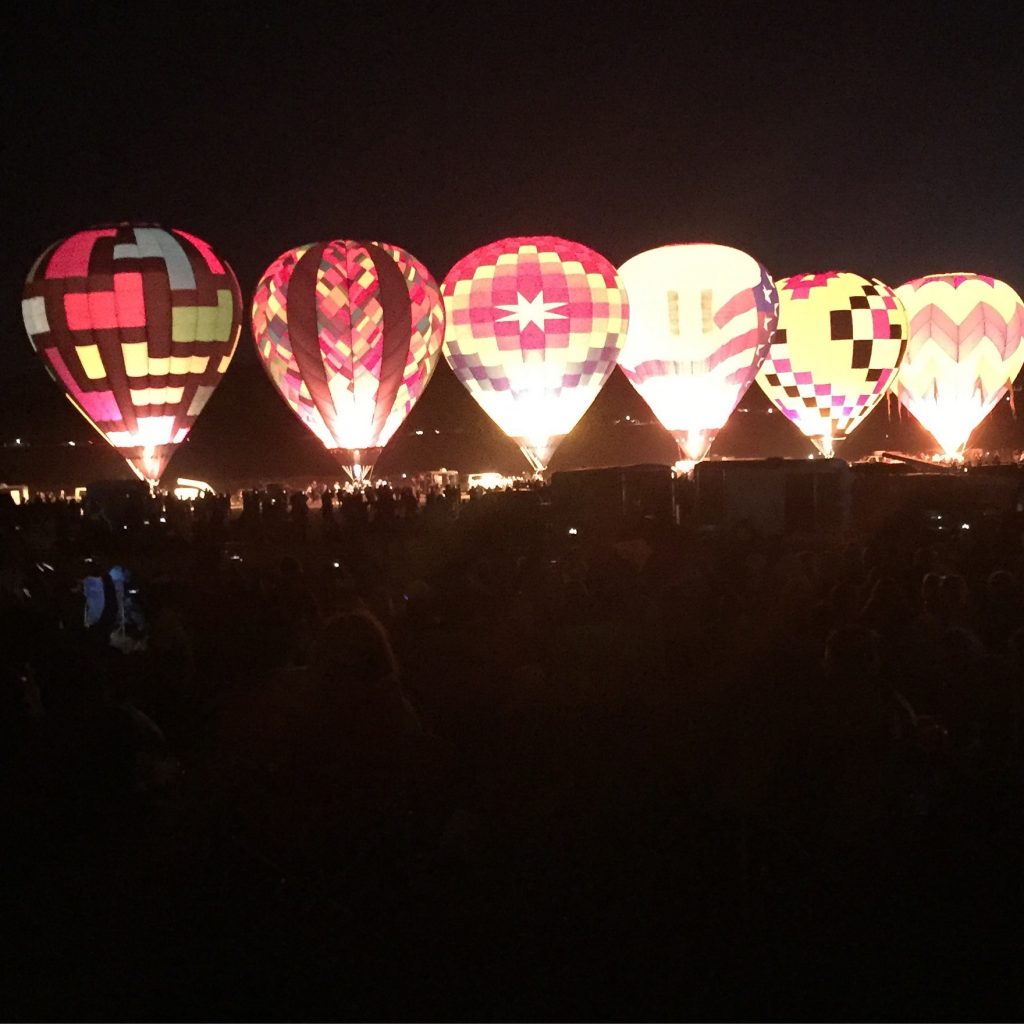 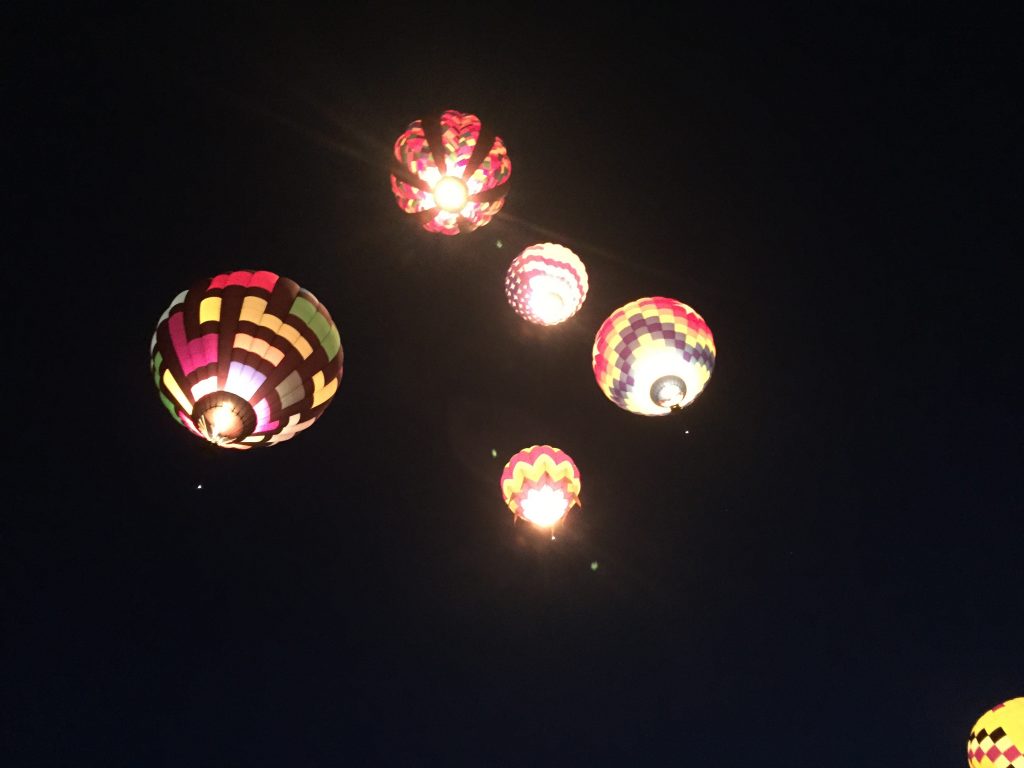 Dawn Patrol was absolutely beautiful. The weather was nice, not a lick of wind! 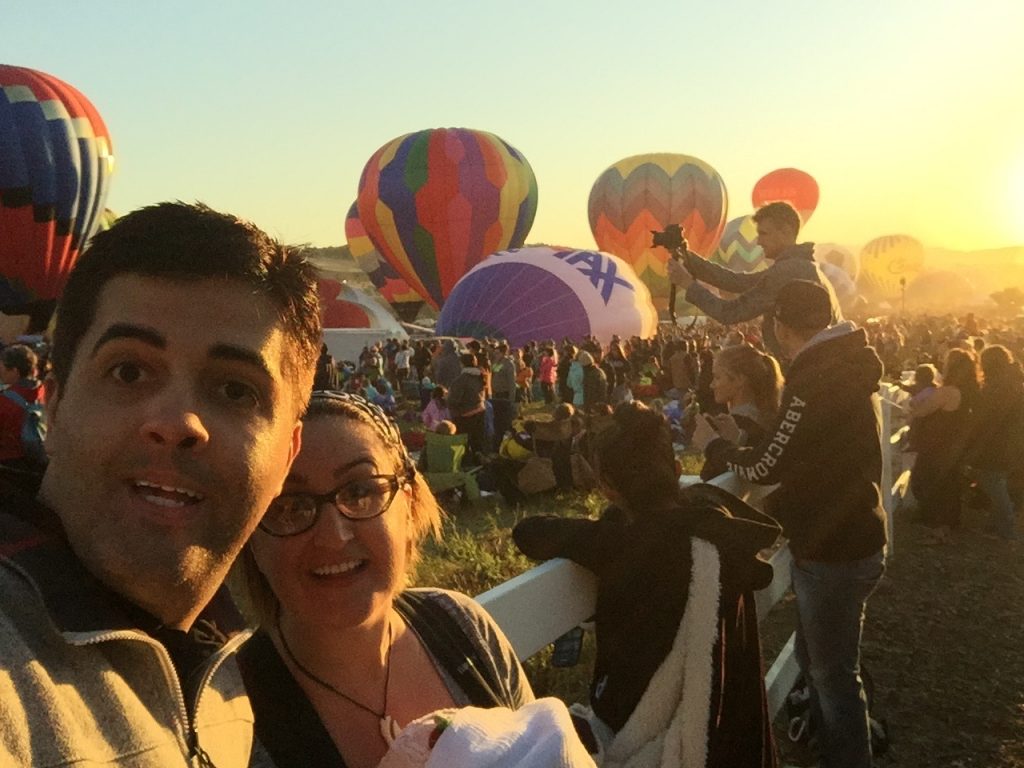 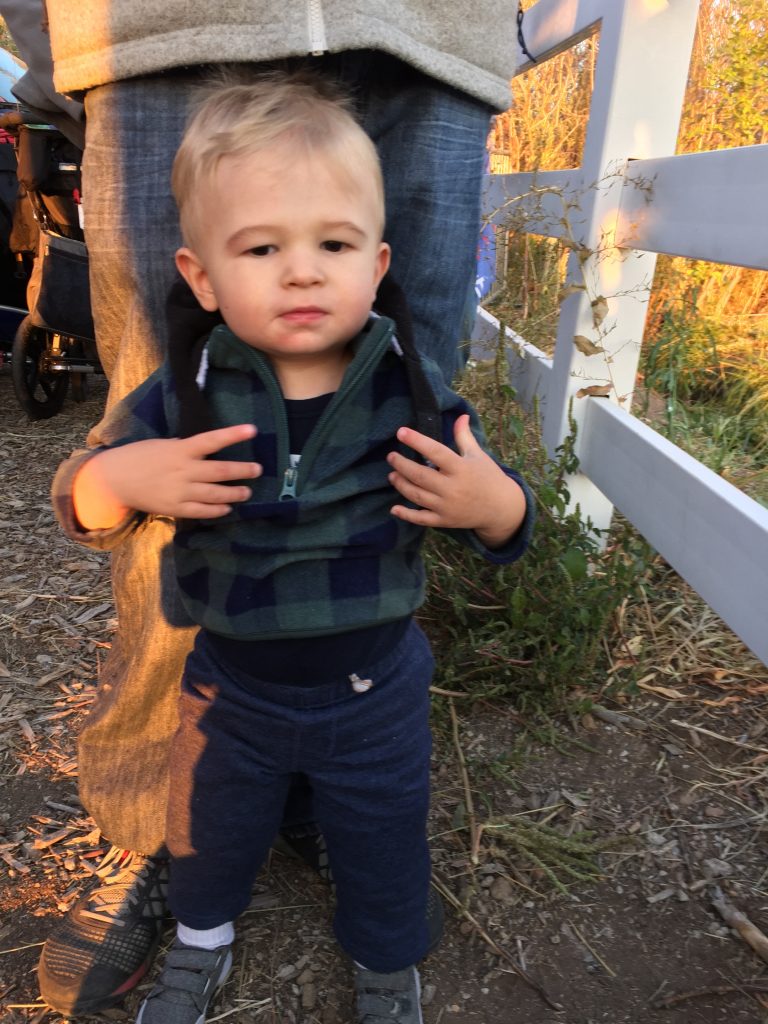 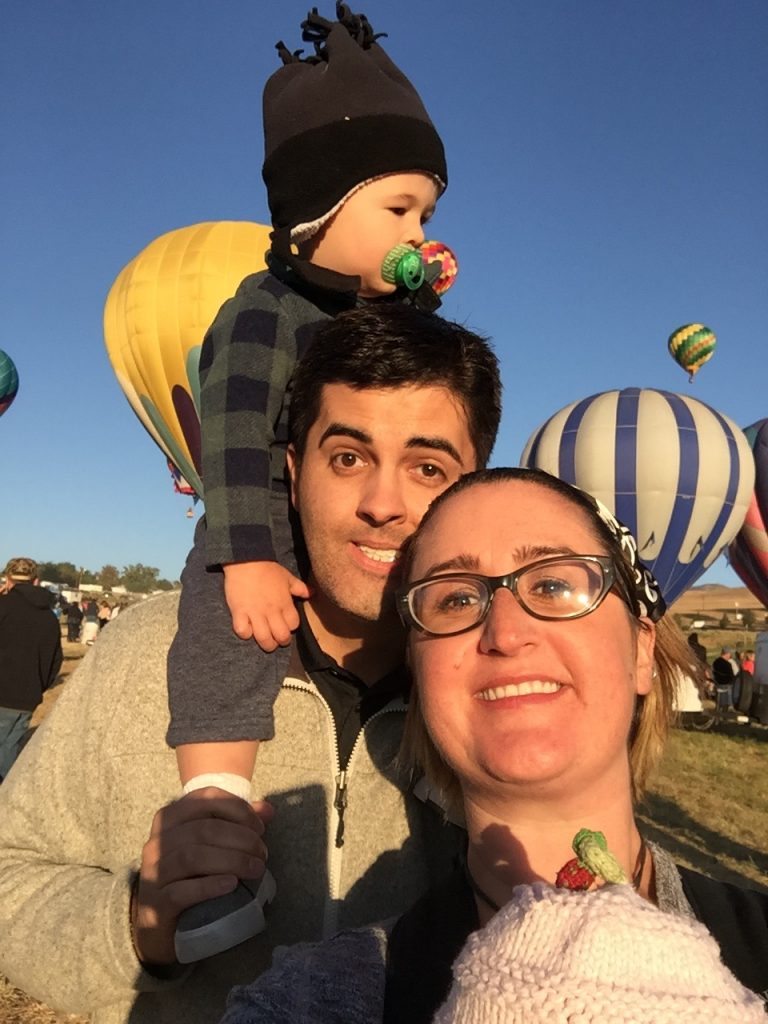 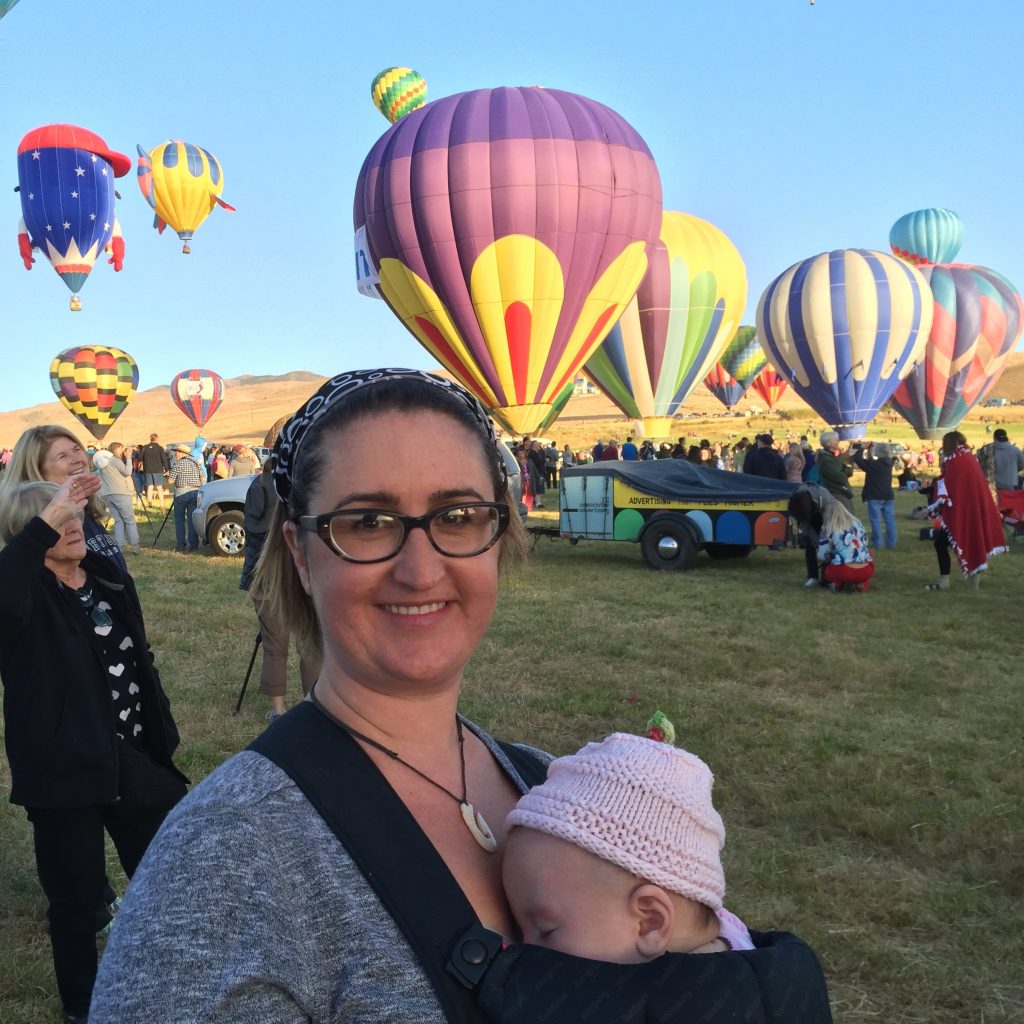 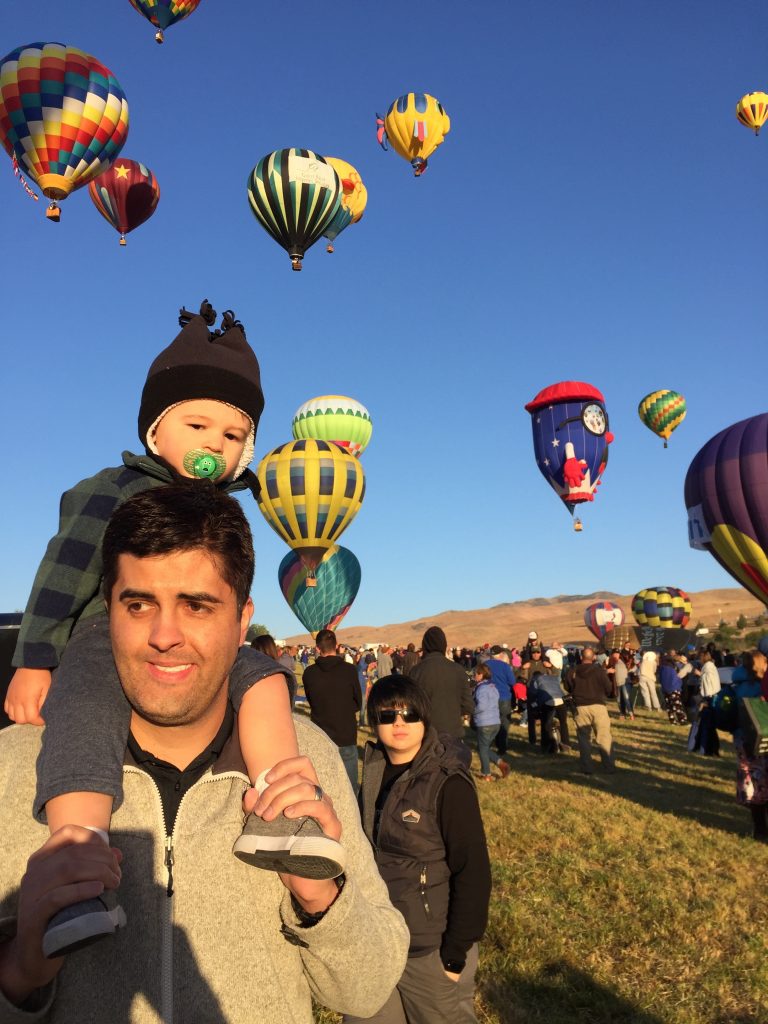 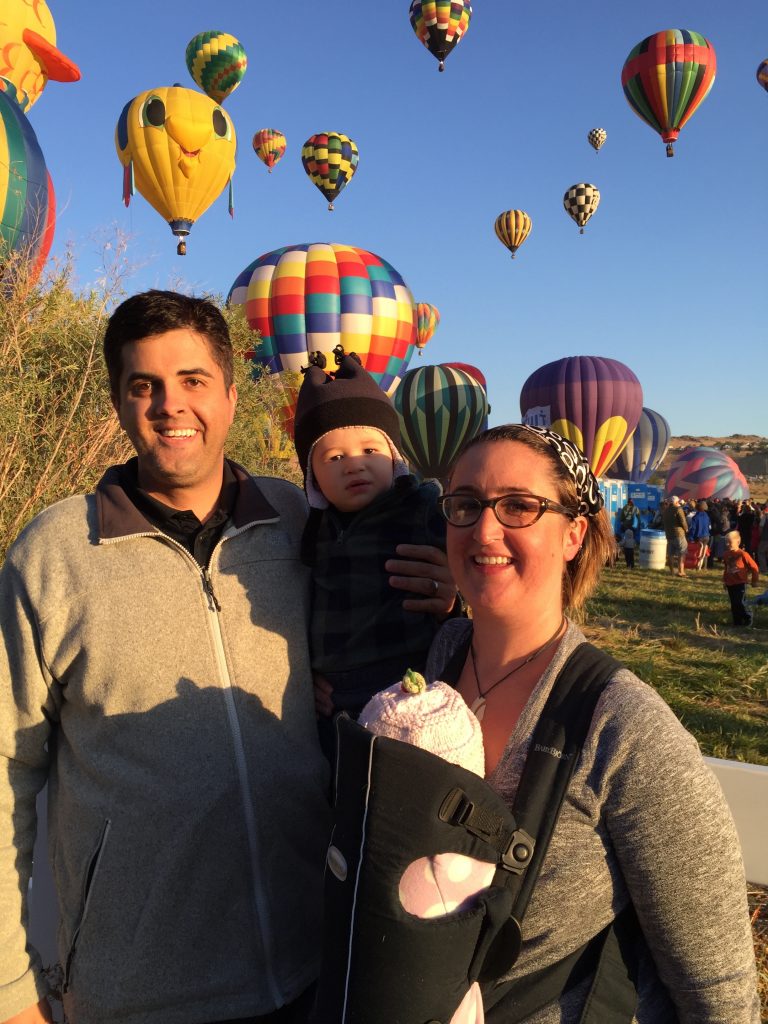 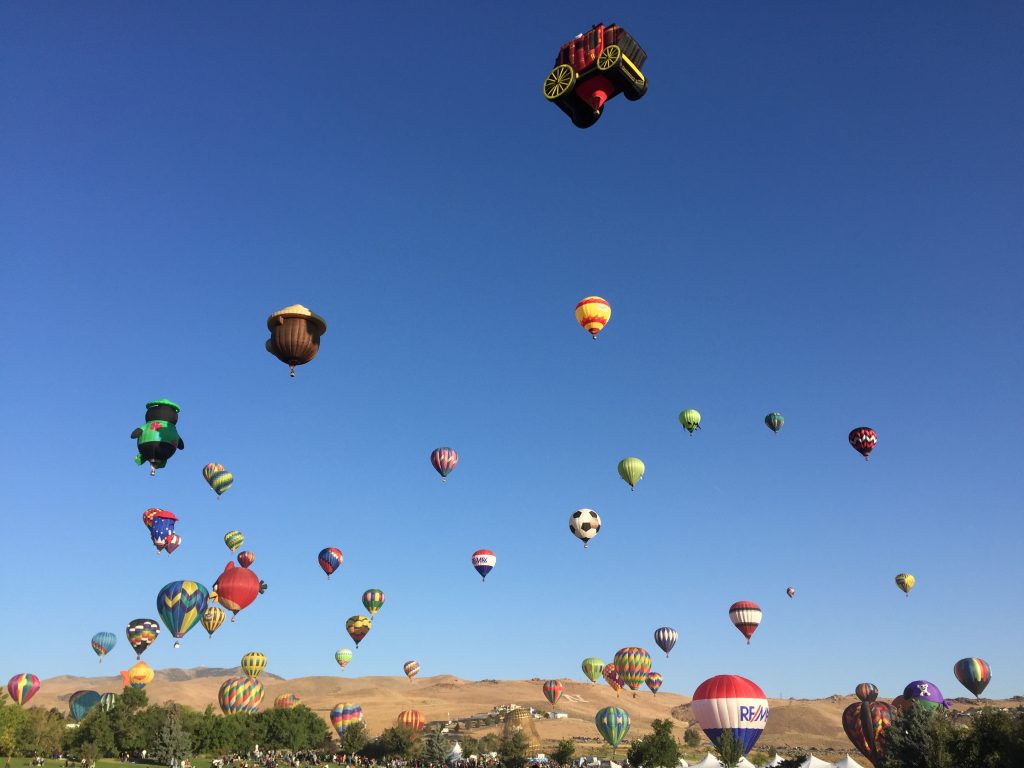 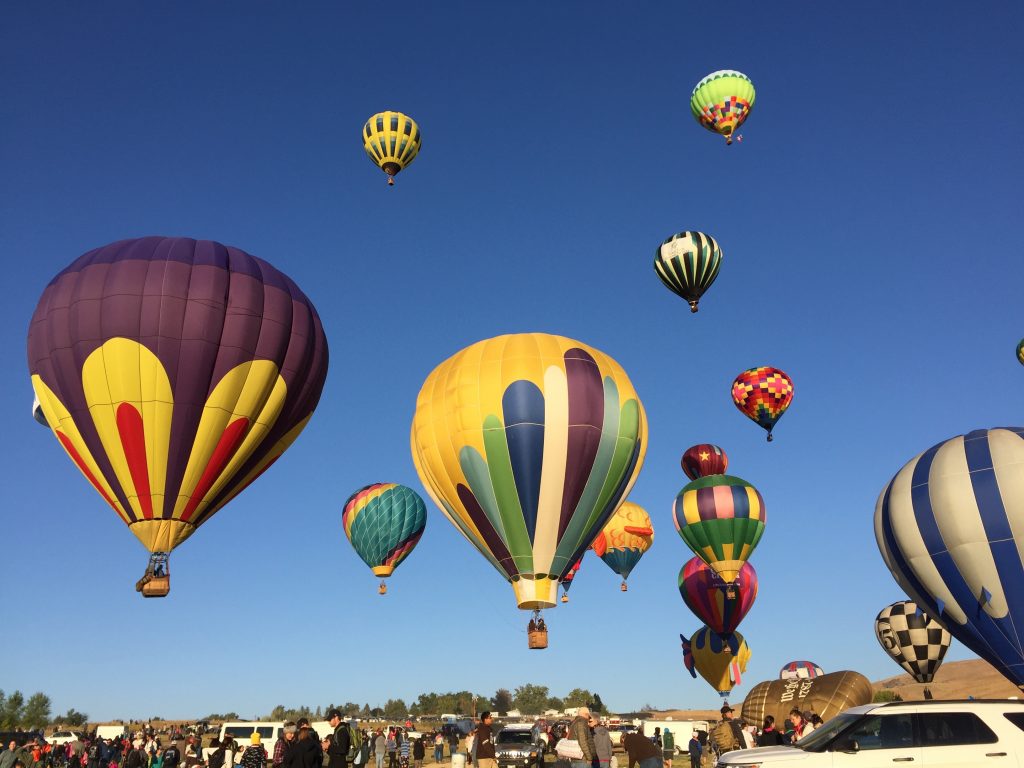 It really is such a fun event!

I have been wanting to really write-up a nice blog telling some funny stories of the trip to India but I keep leaving my notes at work and well, at this point memories and anecdotes are fading. So I’ll just leave with some parting thoughts with my wonderful trip to the East.

People in India live simultaneously with their past while keeping up (as best as they can) with modern technology. While water still is not clean, they have things we have come to appreciate here in the US like wireless internet, cell phones, cable TV even modern marvels like indoor plumbing. It is funny to see women dressed in their beautiful sarees, flowers in their hair, wearing lovely jewelry and then hopping on the back of a motorcycle and riding across town. They are very connected to their traditions, whether they are religious (which it usually is) or cultural. In just the two weeks I was there, there was one holiday. Apparently they happen all the time. And for a culture that doesn’t really gravitate to alcohol as we in the US do, they must really actually celebrate the holidays for what they were meant to be celebrated for.

As I mentioned in a previous post, they have the most insane traffic in the world, yet it all seems to just flow with very little aggression. I am still mystified by this.

Eating with my hands was wonderful. Kris and I were eating dinner last night, just some grilled chicken and sweet potatoes hot off the bbq and I found myself eating with my hands. Wait… my HAND. I got pretty good at hiding my left hand as it was definitely not proper to eat in any way with the left hand, that hand is reserved for other things (in the restroom). I just liked the idea of not really having to be so proper, trying hard to manage both a fork and a knife. As long as the left hand is out of sight, it was fair game. Dig IN! nom nom nom

I loved the music. I don’t even know what to search in iTunes to try to find it, but I really liked it. I’ll have to ask Jacob about it. I need to get connected to Bollywood and get to know some of that world. I have to say the men are so handsome and the women are stunning. I am sure the movies are pretty good too.

So, would I go back? Yes. Even though I have hardly articulated the real impressions that the country has made on me, but I definitely want to see more and explore more of the gigantic place that I saw just a teensy sliver of. I would like to see the North, yes, the Taj but lots more.

If I find those notes of all my observations, I’ll update this post.

The people of India, being a mix of a few hundred local tongues, religions, casts and other categorizations, have a very unique way of living. I have come to appreciate many of these as I observe them in action. I have been here one week now and like with all of my previous travel, I am overwhelmingly grateful for an immersive experience and not a touristic one. I may not be seeing the Taj Mahal, but I am learning a thing or two more about what life is like here and this is what I crave more than just ‘seeing’ stuff.

Friendly bobble Since I have arrived, I have not given a smile that was not returned. That is a first for me in being a foreigner. My first impression is that Indian people are very kind, or at least make it seem that way on the surface to strangers. Now, the wobble head thing, that is a different story. I had a hard time with this because the bobble of the head almost seemed to me to be like the equivalent of rolling the eyes. Like saying, “Ya, [sigh–eye roll] I guess” when in reality, it is generally meaning “yes” or “good” or “I understand” or “thank you” and things like that. Generally the bobble is affirmative and positive, even though sometimes, if the smile isn’t there, to me, I perceive it as showing annoyance. But that is also just me and my “american insecurities”.

Politeness Formalities For a country with such rich culture and tradition, Indian people are blunt, to the point and leave out general fluff we include in our daily vocabulary. I commented to Jacob that he never says “goodbye” or “thank you” at the end of a phone conversation, the conversations just…end. When I pointed this out, he said, “we don’t bother ourselves with these formalities, we just say what needs to be said.” He sneezed and I asked, “what do you say when someone sneezes?” and he said, “We just carry on”. And after thinking about it, I don’t even know why I asked. If they don’t say goodbye on the phone, they definitely wont bless you when you sneeze. I have to credit the name of this post to the visiting professor who is here in Bangalore who blurted out this hilarious phrase when talking about how nobody says these polite formalities.

Be Aggressive on your feet Jacob tells students and visitors that they must be aggressive. If you wait to be next in line, someone will just step in front of you. There is very little order in that regard, it’s every girl for herself. Today I was ordering some coffee and this was tested. There is a long ish counter where students crowd up and there are a few workers behind the counter, imagine a crowded bar. A girl in front of me was finished and right as I was going to fill her spot at the counter, someone jumped in and ordered, knowing good and well I was there and had been waiting. It didn’t matter. So, I held my Rupees in the air and called out, “2 coffees” and was served immediately. I guess we, in the US, are sometimes worried about offending someone else by doing something like that (taking cuts) when here nobody gets offended, they just get more aggressive with the line.

Be aggressive on wheels Now take that philosophy and apply it to the roads. It’s every vehicle for itself, and if you cut someone off, they aren’t going to chase you down and yell at you, they move on, and cut someone off 2 seconds later. There is an order to the chaos. Last night, on the back of the scooter with Seema, there was one lane turning into another lane and there is no signal directing how the lanes will intersect. Therefore, it was just a really slow mishmash of autos, rickshaws, busses and 2 wheelers seeking their chance to advance forward in the madness. Nobody yells, everybody honks (like, all the time, always you hear honking, always) and it just goes. There isn’t road rage and they have probably the worst traffic in the world. Why can’t we just cool it in the US?

Power struggle Every now and then, the lights go out. India’s growth and development is in crisis with the amount of infrastructure to support power. They use quite a lot of coal but also have some green methods like geothermal, hydro and solar. Still, there isn’t enough to support the need and demand. In some states, there are mandatory periods of power outages to conserve energy. Could you imagine? Each day for a 2 hour period, not having any electricity? Here on campus, they have back up generators so that these outages do not disrupt things like class, internet connection, and things like that so they go out for 15 or 20 seconds and the come back on. In other places, the outages are longer and more frequent.

Slow or Fast The pace in India is noteworthy. I remember noticing how in Costa Rica, everyone walked so slowly, compare that in the tube in London where they are practically running! Here, at least on campus, people are one of two things: on time (so why go any faster than a very leisurely walk?) or late (therefore running). I haven’t seen to many people match my usual pace of walking which some might say is a little faster than it needs to be, especially if I am not late. What’s the hurry?

Finger-licking While eating dinner with Seema and her two kids (7 and 12 years old), her daughter asked me, “so, you always use a fork? why don’t you eat with your hands?” to which I said, “well, we do have pizza and fried chicken, but other than that we use the fork” and she really thought that was funny. I’ve mostly adapted to eating with my hands, but I am usually eating something that includes some type of flat bread that can be pinched and dipped. Jacob told me next week we would have a traditional Kerala (a southern state where he is from) meal which is just rice with curries and chutneys so I’ll be piling rice with sauce into my hands and gracefully shoving it into my face. Should be photo worthy.

Wrapped The students here on campus have a specific dress code. Men are to wear slacks and a button up or pull over collared shirt. Women must wear a high collar longer sleeved shirt and long pants. Many of them also wear a scarf. The visiting professor and I were talking about how the women here must have magical shoulders because of the way they wrap their scarves and how they never move, ever! But Seema revealed their secret, they use pins! Many will wrap it like we do in the states, once around the neck and the two sides fall in front, but the way I like it (and may adopt when I get home) is to drape the center of the scarf in your upper chest area and let the two ends fall behind you. This is where they cheat with pins or walk ever so gracefully to keep it there. I love the colors. Many times the pants, blouse and scarf are all different but complimentary colors and look so amazing. I gawk at everyone here. The women’s clothing, the handsome men, the darling kids… crazy tourist!