Another easy ride from London (Heathrow) to Madrid and we were to our next destination. It was only a 2 hour ride if memory serves. Pablo picked us up and took us to his favorite seafood restaurant. Wow, we ordered some unique stuff! 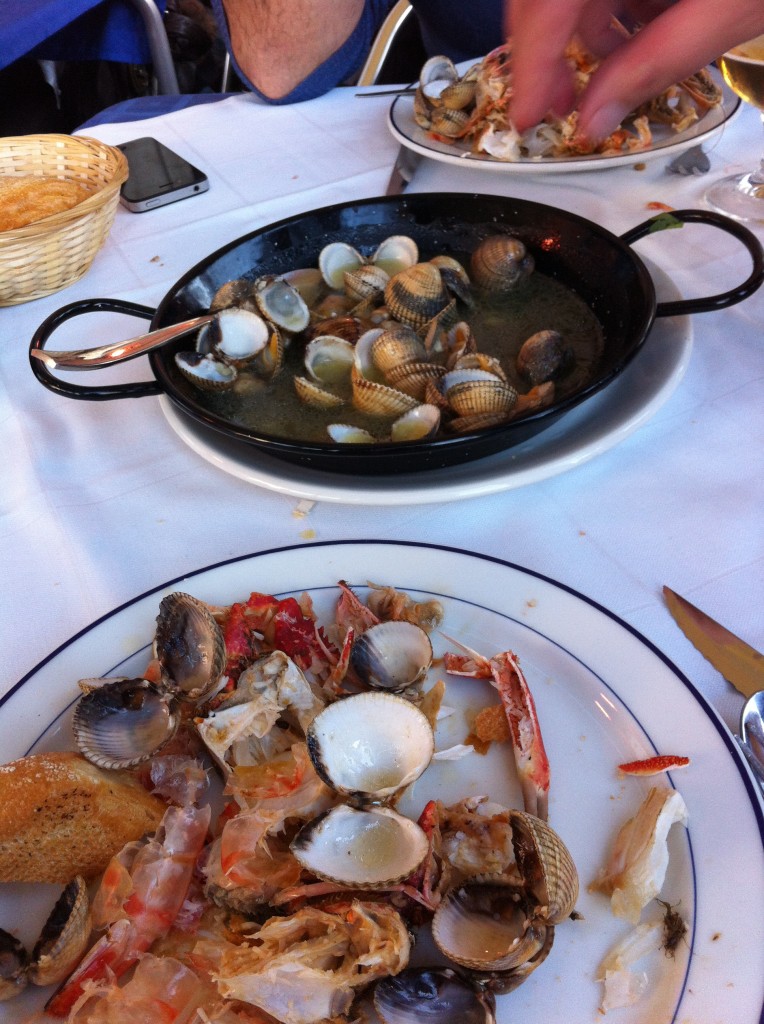 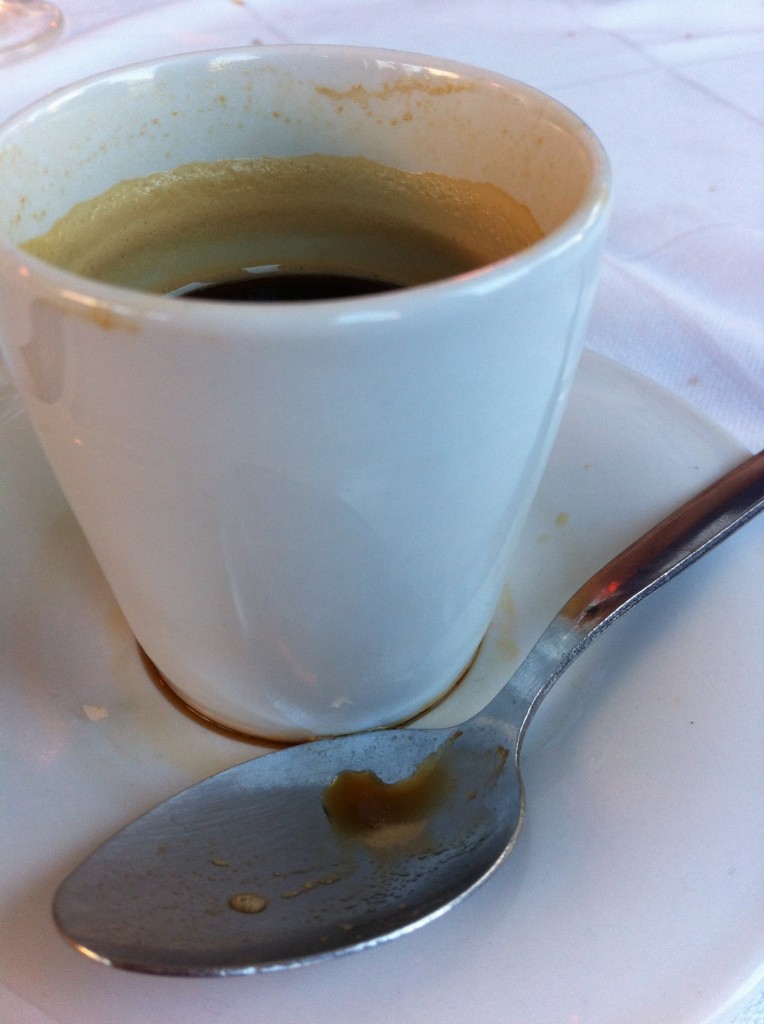 I have to say that the coffee in Spain is just wonderful. I take forever to drink a cup of coffee at home and in Spain, it is just a shot of espresso–no dilly dally, just drink it! I find it to be a much more efficient way to caffein-ate.

It was wonderful to see Pablo, of course with him it is always a good time with lots of laughing. 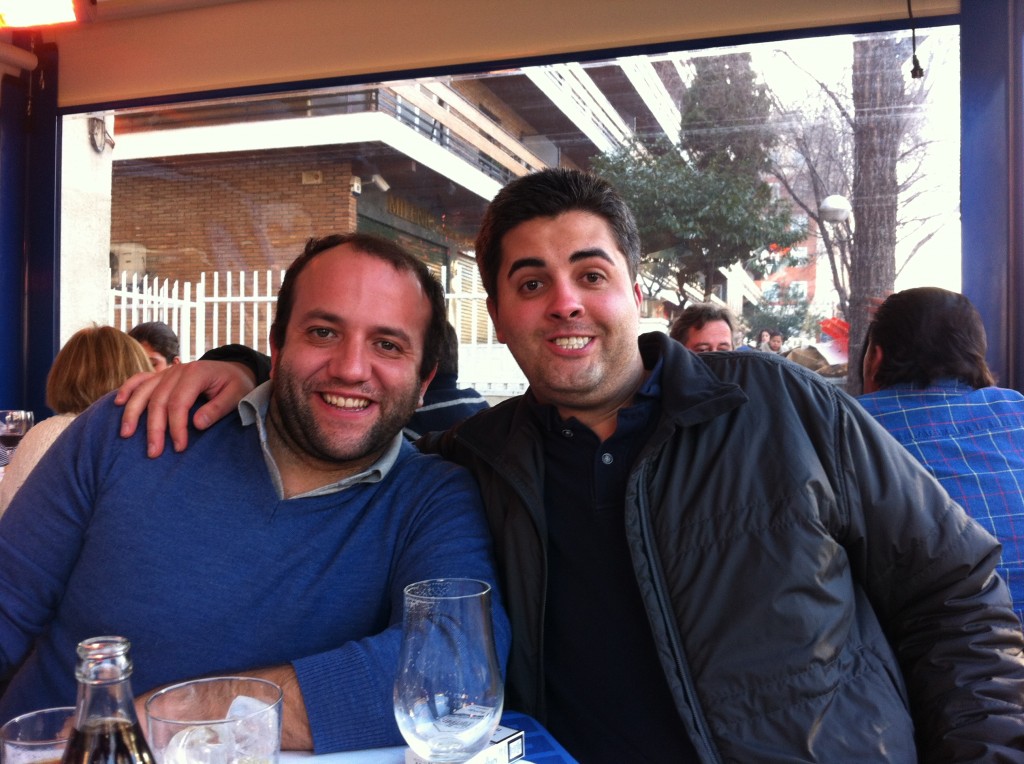 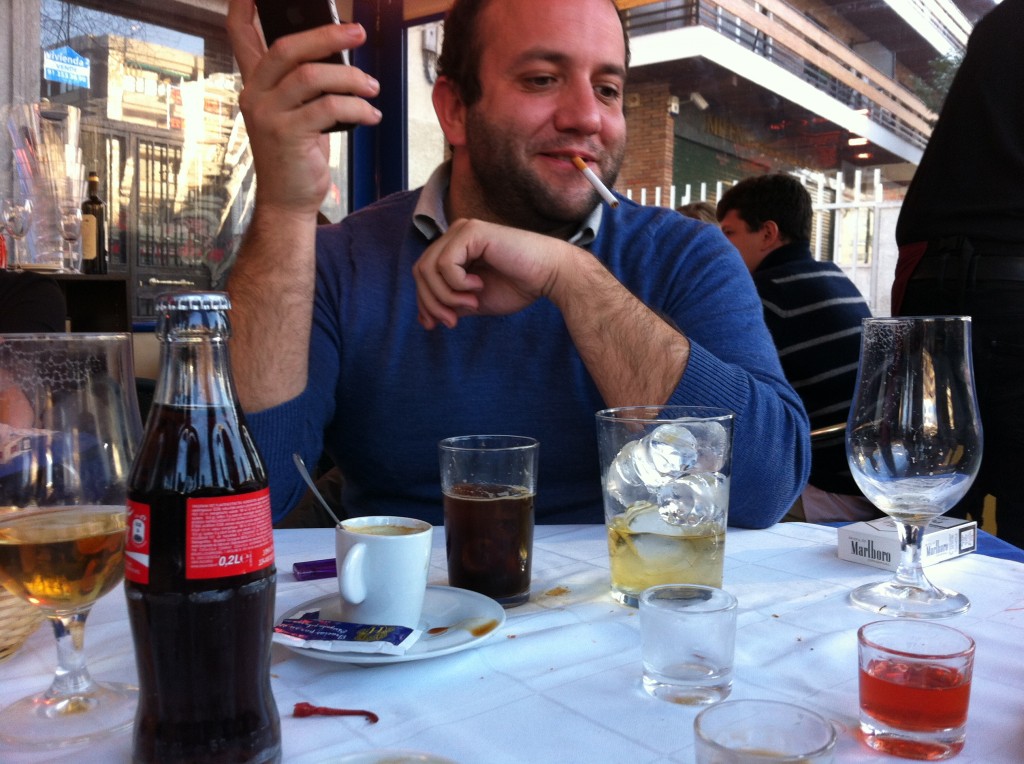 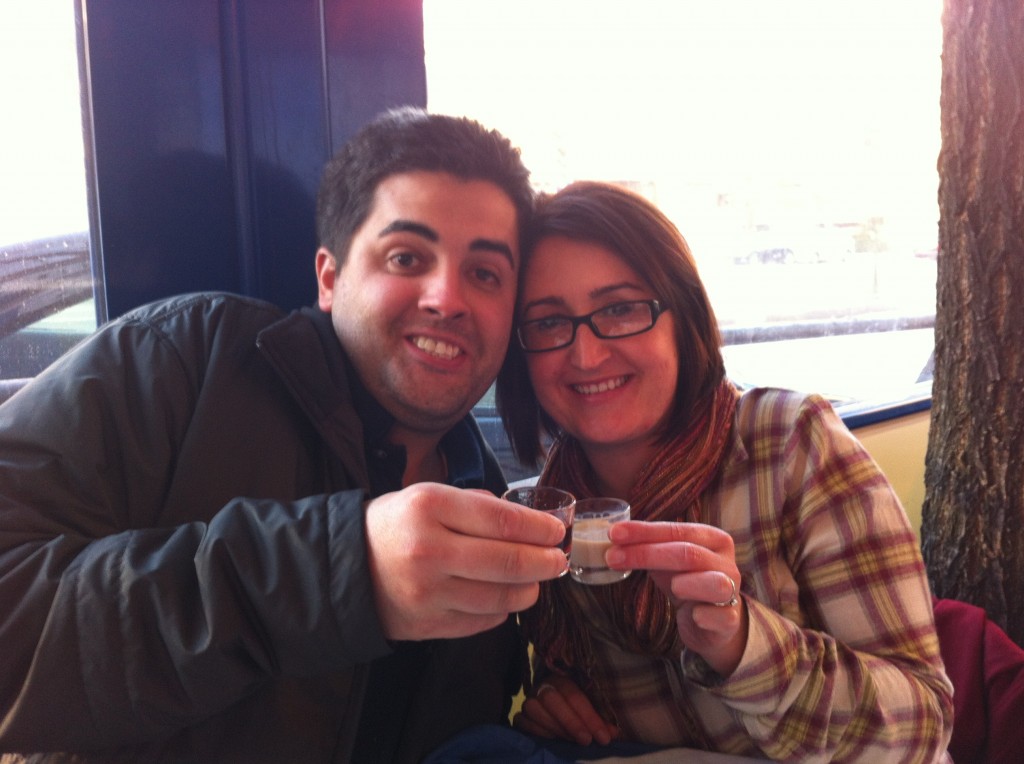 After lunch, Pablo took us to the apartment he had for us. His cousin was in the process of moving out so she let us stay there before she moved everything out. It was another wonderful gesture by Pablo. The Spanish live in apartment type buildings opposed to single family homes, which is such a contrast to what we are used to in Reno. But we definitely liked living like the locals. In the first photo, the tank in the top corner is the water heater, Kris and I never showered so fast! 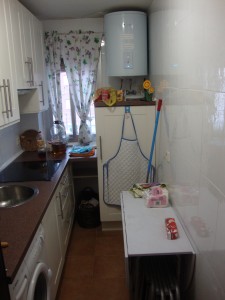 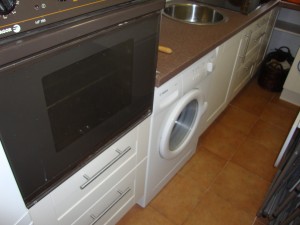 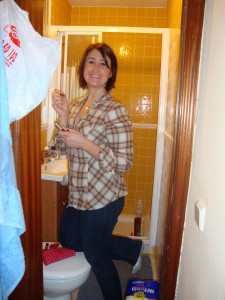 The next day, Kris and I did a bit of exploring in Madrid at Plaza Mayor. It was so neat to see how they decorate for Christmas. Pablo let us know that even though it was just 2 days before Christmas, that the real celebration and gift giving actually takes place during the first of January. January 5th? I have already forgotten, but it is somewhere around there. The significance of this date is when the 3 wise men arrived to Bethlehem to see Jesus and brought him gifts. For this reason, gifts are exchanged at this time, not on the 25th of December like in the US. 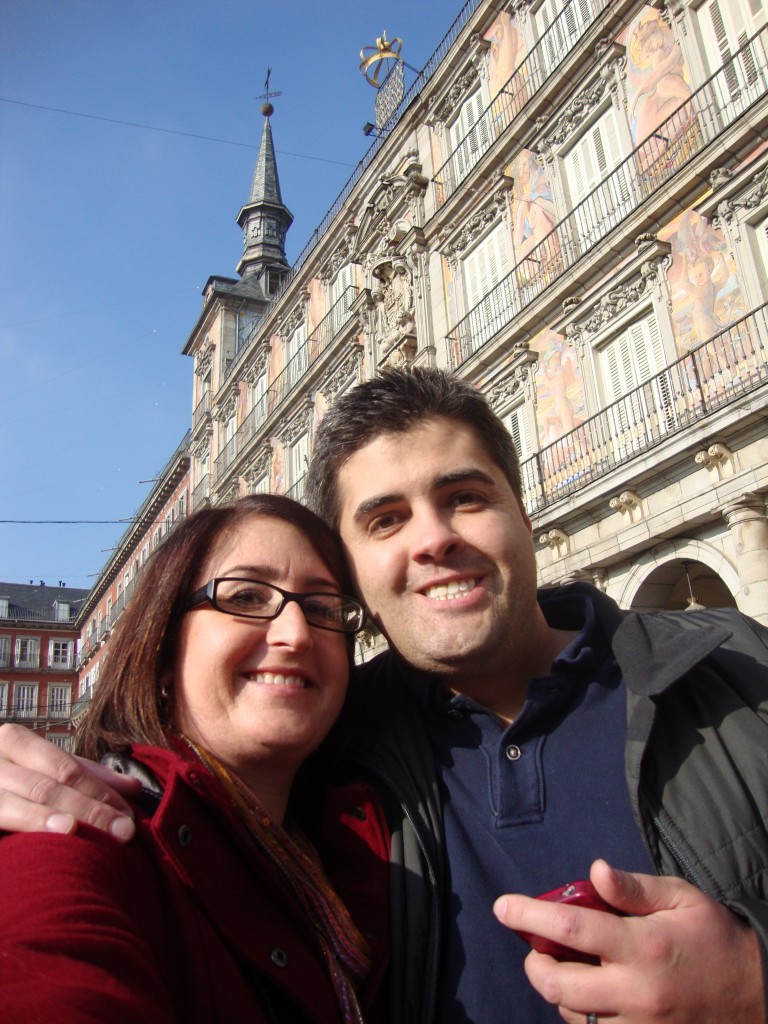 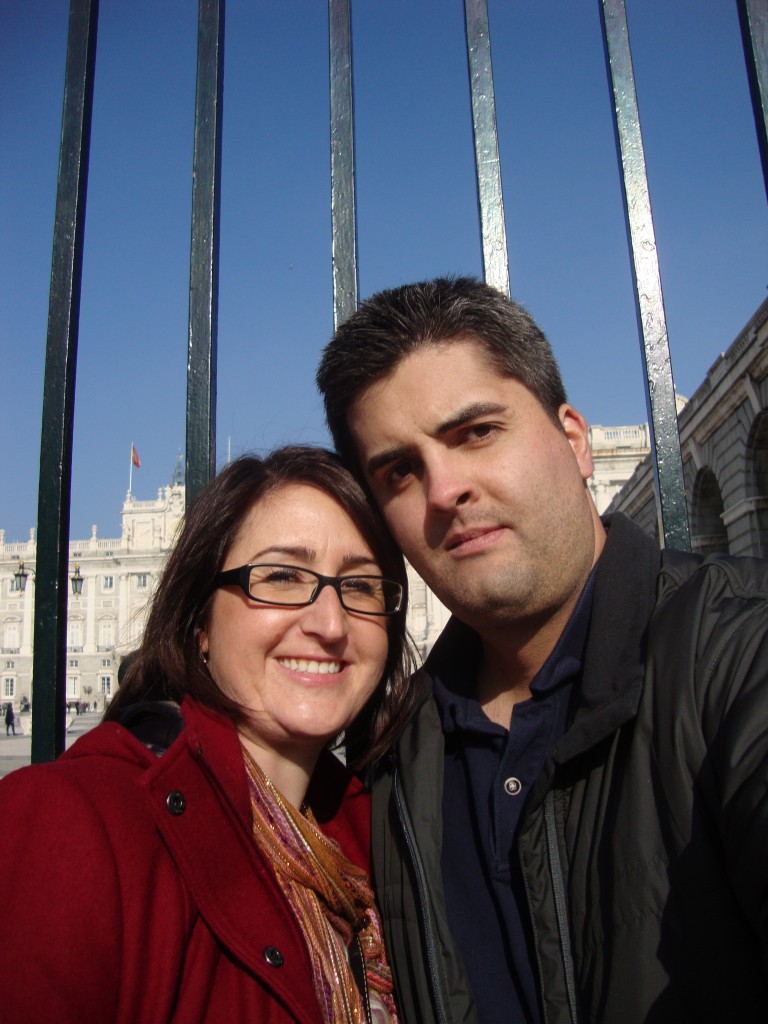 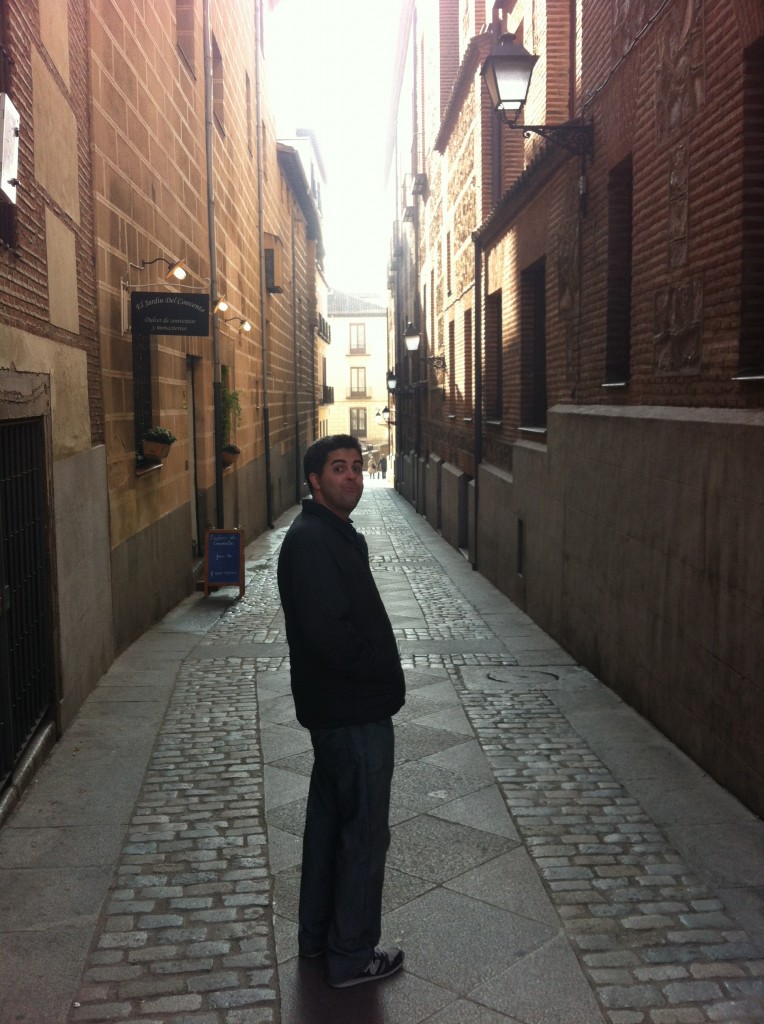 I love the narrow streets with unique stone instead of pavement or asphalt. They remind me of something from the movies.

Because Madrid is more or less a travel hub in Spain, we utilized the apartment in Madrid (Tetuan) as a drop off point so each time we ventured out for a few days to a different city, we would always come back in between. This allowed s to travel a bit lighter for our shorter trips. Each time we came back, we’d have dinner with Pablo at a new cool place. One evening we went to meet his parents and brother. His family was so welcoming and kind. They gave us some champagne and chocolates!

I also met up with Susan from our Madrid program. We met up around 9 for some tapas and wine. Gabriela, the other program assistant, had recommended a swanky tapas bar but it was sunday so it turned out it was closed. We found another place, which incidentally, had the best croquetas that I had wile in Spain. I really want to make some, but I don’t think they are the healthiest. It was so nice talking to Susan. She was originally from the US but relocated to Spain after meeting a Spaniard while she was studying in Spain. Now she works for USAC, jeez she got lucky! Such a wonderful opportunity to work for a study abroad organization since study abroad is what ultimately took her to Spain.

I loved Madrid, though just as with London, I feel like I only saw a speck of it and that there is so much more to explore. All the reason to return someday. If I don’t have kids, I’ll take Leeya and Danell there!