One of our favorite wedding gifts was from Kris’ parents, they bought our plane tickets for our honeymoon! We are forever grateful!?After a very busy year in our personal and professional lives, we wanted to wait a few months after the wedding and end the year on our honeymoon. We spent Christmas and New Years away and it was incredible. I highly recommend spending a holiday away from what you know, and if you can, do it outside of your home country. Seeing how the Spanish celebrate Christmas and New Years was such a wonderful experience!

Well, I’ll get down to it, since there is quite a bit to share.

If you don’t know Kris and I, we are bargain hunters while also wanting to ‘do it right’ so we found a great deal from Las Vegas to London on Virgin Atlantic in business class. It was well worth it. Flying business class is a much more comfortable ride when you have to sit in the same spot for 10 hours. The food is better and the bathrooms are always…right there! So even though we weren’t headed to Spain just yet, we were on our way to London. 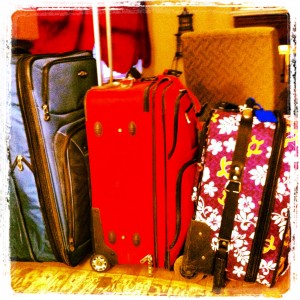 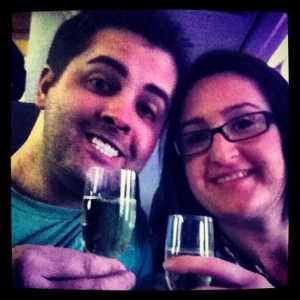 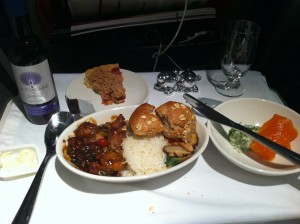 Shout out to Matt and Claire for letting us crash at their place the day before the flight down in Vegas! The flight was great. We departed in the late afternoon (4:30PM) and arrived at 10AM local time (2AM on the clock we were used to). They gave us some champagne for take off, we had a nice dinner and were served breakfast before we landed.

When we landed, Pablo had given us some instructions to get to his place. We flew into Gatwick and needed to get to his part of London, which took about an hour. Here is another part of the trip where we were trying to be economical. Riding the train, then taking the tube with 2 suitcases each was absolutely horrible. We were grouchy and tired by the time we made it to Pablo’s flat in Westminster. Of course it was raining… 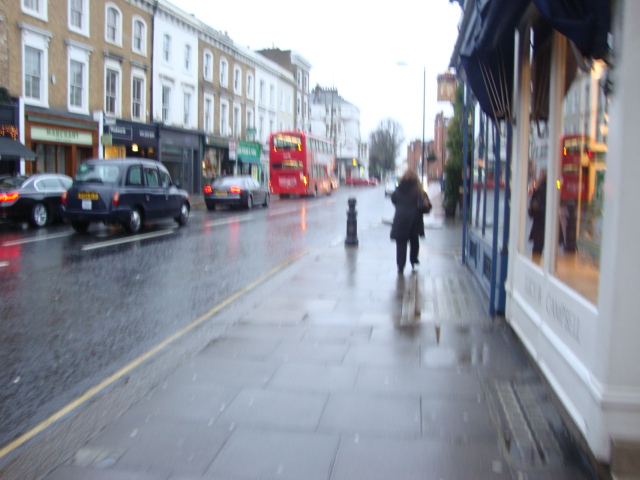 Despite grouchiness, it was so awesome to be in London. It was just what I was expecting, but even more! I loved seeing those classic taxis and the red double decker busses. We were actually really excited to see Pablo’s swanky flat he shares with another guy from Spain. He is in London on business for about a week each month. He let us stay for free which was just awesome! 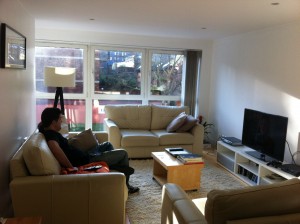 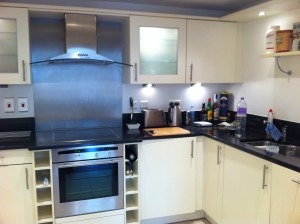 We both took a shower, tried our hardest not to fall asleep and powered out of the building and tried to find something to eat. By this time it was the early afternoon and we were hungry but Pablo told us not to spoil our appetite because he made us reservations at his favorite place in the financial district. So…we went to this pub that was supposedly where we could get some fish and chips and a room temp beer (when in Rome, right?). We found it just a few tube stops away from Pablo’s. 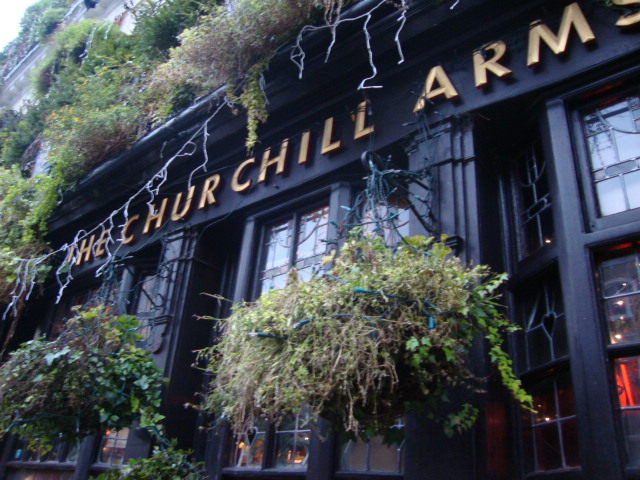 It was exactly what I would have imagined a British Pub to be! Inside was even cooler: Dim lights, foggy windows, lots of people, music, crazy stuff hanging from the ceilings like pots, pans, shoes, guns, license plates, and so on. I think it must be this theme that places like Applebees try to imitate, but they just can’t pull it off like this. Unfortunately, I have no photos, but even worse, there were no open tables nor a hostess to let us know what we should do…so we walked back out into the rain with our tales between our legs and heads low. Sometimes I wish one of us were a little more brave in places we aren’t familiar! #opportunitiesforgrowth

Eventually, Kris and I found a restaurant that had a similar feel, but a little bigger and more of a restaurant than a pub. I had some wine, Kris had some (quite a few) beers and we both got a sandwich hoping to not destroy our appetite but to take care of our hunger and exhaustion. One thing I thought was cool was the wine was priced by the small, medium or large and each had a precise amount of ounces. Just like beer! Brilliant! I mighta ordered larges. Kris, unfortunately, in his ravenous stage, drank way too much and got pretty drunk. So in my normal fashion, stopped to make sure we were able to find our way back to our beds. Before we left, we asked our Scottish server to snap our photo. He seemed annoyed but was still polite. 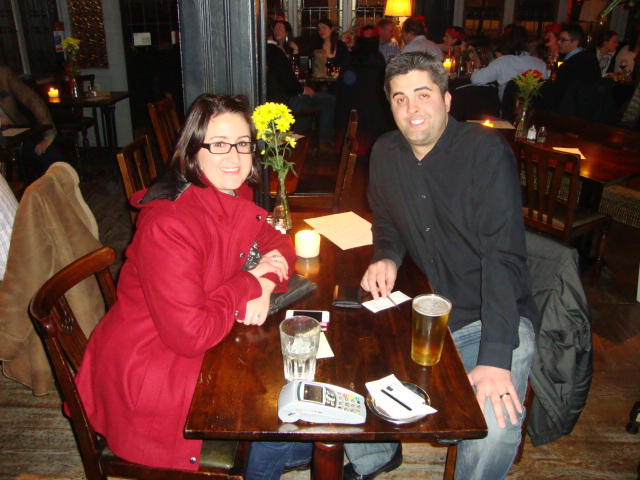 Don’t we look tired? You can really see it in Kris’ eyes! Or was it the beer? We made our way from here a few tube stops down to the financial district and found our swanky cool restaurant. Oh ya, we were so tired so we decided to take a gamble that the place would take us one hour early so we showed up at 6 instead of 7 and the nice hostess was able to get us a table in the bar. I just wish Kris and I were less exhausted because this was really the type of place we would have enjoyed under more normal circumstances. The new place in Reno, The Brasserie St. James, reminds us of this place (no pics though). Kris and I both ordered conservatively because of our late snack, which was also likely a mistake. Their menu was incredible. I ordered chocolate truffles for dessert and it was just perfect! From here, you guessed it…we went home and went to bed to try to adjust to the European clock. It was about 8:30, we passed out!

We woke up around 8 I think, it was a good 12 hours of sleep and I felt great (though still a little off). We found our way down towards the river. Pablo’s place was literally about 3 blocks to the River Thames. We stopped in at a little shop that sold croissants and coffee and had a nice breakfast sandwich and coffee to go. We wanted to ride the Eye of London and take a double stacker bus. I also wanted to see Westminster Abbey and Buckingham Palace, oh and have some fish and chips! Well, we got most of that taken care of… but not all. 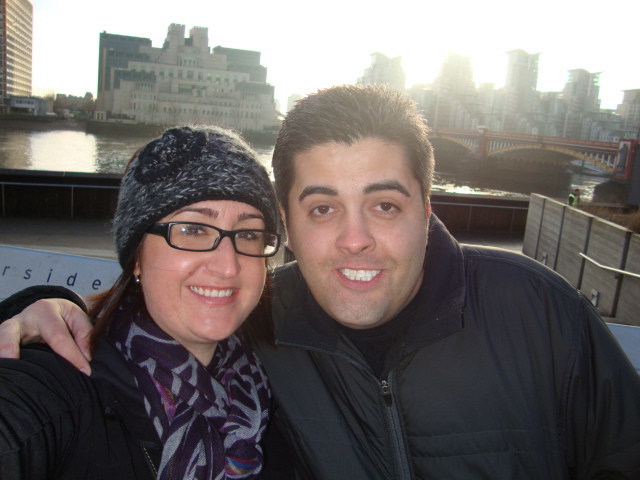 It was cold, and we knew we were in for a fair bit of walking. I find that you have to choose between looking cute and taking care of your feet. The recurring theme on the trip was me wearing a cute outfit and throwing on my florescent  tennis shoes with it. I must say, my feet were well taken care of and I dealt with being in a fashion capital and not at all blending in.

Anyway, we stumbled on the house of parliament, we weren’t sure what it was because we came upon it from the other side opposite from Big Ben. For a second we thought it was a church, but when we saw the guards with guns, we realized it was a more important building (aye Americans). 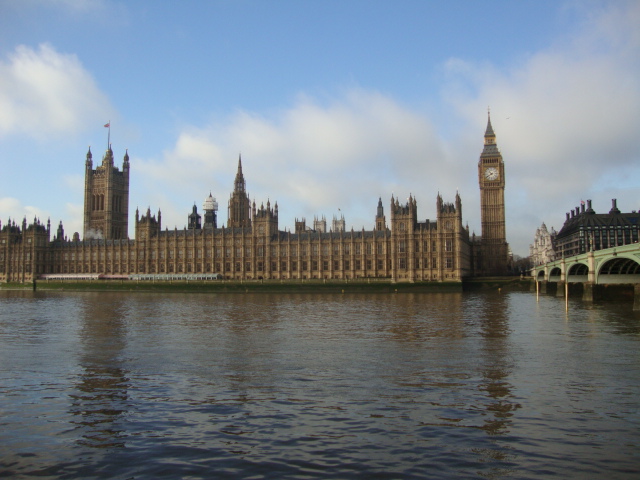 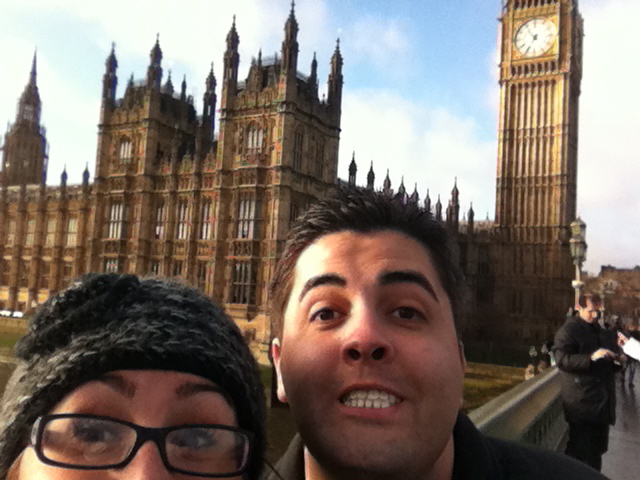 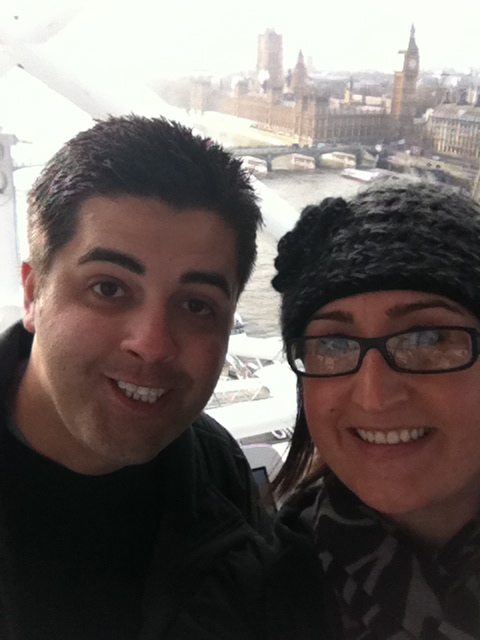 We rode the London Eye, it was pretty cool. I got a little nauseous and regretfully was a little afraid of heights. I am getting old. When we bought our ticket for the London Eye, there was also a few other touristy things we could do so we decided to take the boat ride on the River Thames and see a bit more of london than we would have on foot. It was really neat, there was a girl who narrated the whole way and gave lots of neat factoids. 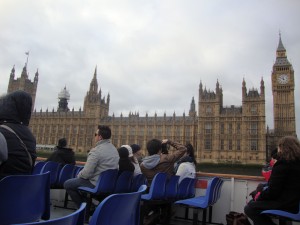 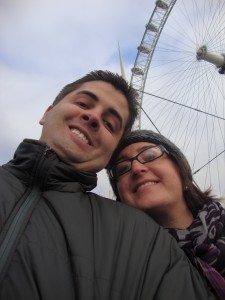 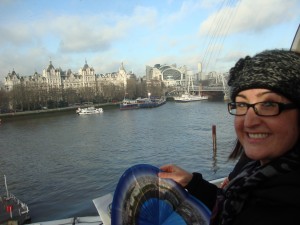 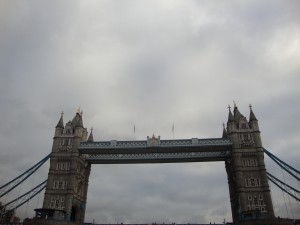 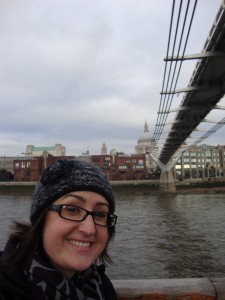 After touristic exhaustion, we headed back to the flat for a little break but we still hadn’t seen Buckingham Palace, Westminster Abbey (we did walk past it, but didn’t snap pics because I wanted to head back later on), eaten fish and chips or rode on the double decker bus. It was the early afternoon and we were getting hungry so we decided to head in the direction of the palace but wanted to stop by a pub for some food. We incidentally found a place that claimed to have the best fish and chips in all of England (it reminded me of the “world’s best cup of coffee” slogan in Elf). We had a beer and tried the world renowned Fish and Chips. They were actually quite delicious! 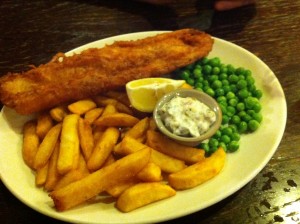 I like that it is just one piece of fish instead of ‘fish stick’ type that you often get in the US. Also, when was the last time I ate peas?!

During winter in England, the days are very short. We learned that pretty quick. We left the pub around 4pm and it was practically dusk so I was sad that I wouldn’t see the palace or the abbey in day light. By the time we made it over to Buckingham Palace, it was nearly dark. I was also disappointed that the famous guards were not outside of the gate. The queen must have been elsewhere. there were only a few guards up agains the palace itself. And they weren’t wearing red, they were in grey. I was still elated to be there, despite how whiney I sound right now. 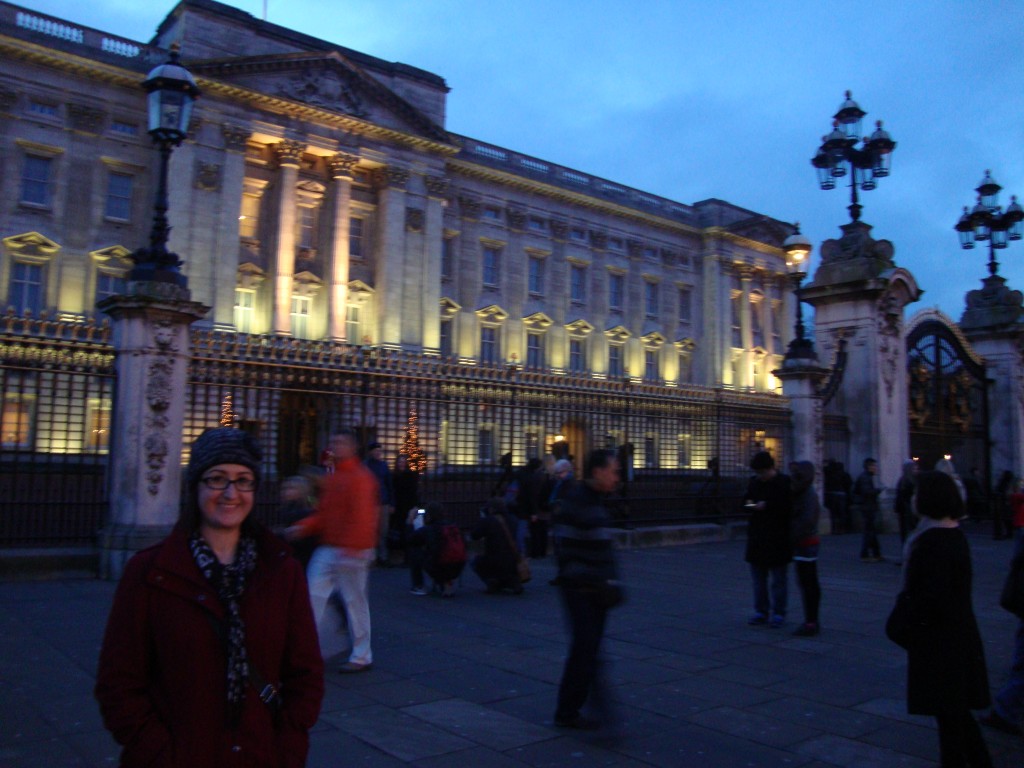 And then we made our way through a park to find Westminster Abbey closed for the evening. Boo. Its ok, I will be back to visit someday. There is so much more of London that I’d really like to see. My last pic is of what we saw on the road all the time, I loved it! And to be honest, it helped…. 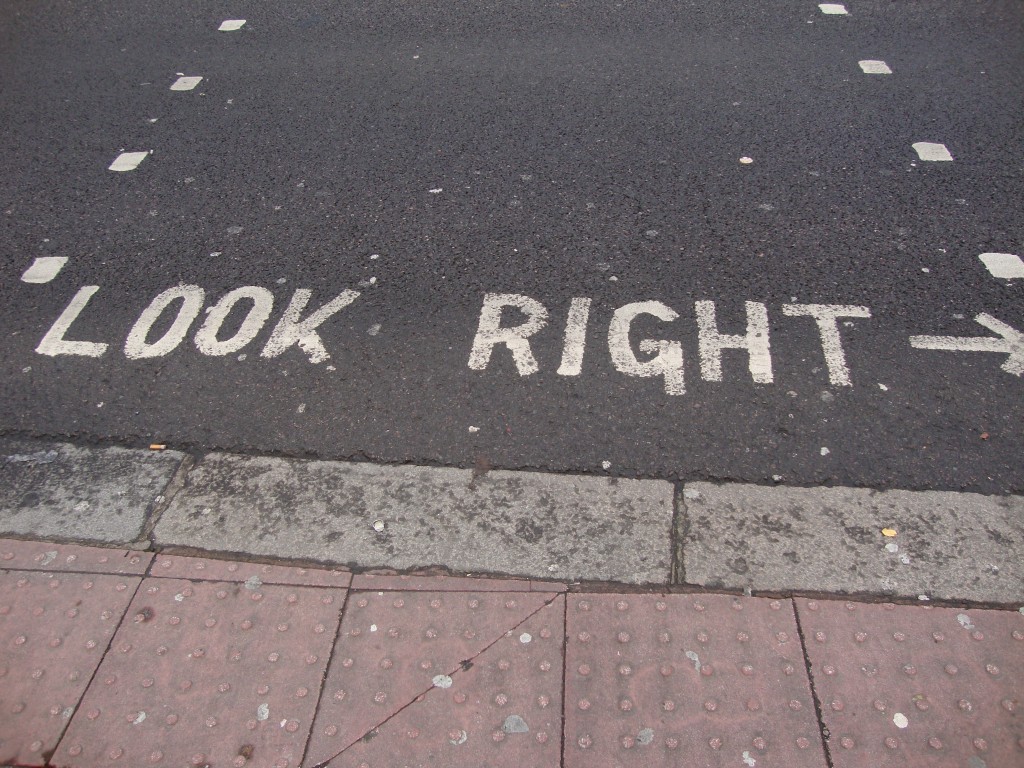 We eventually made it back to the flat and packed our bags for Madrid in the morning!