Wow, these few weeks have gone by fast. Work is keeping me busier than I’d like and getting the old house ready to sell has proven to be very taxing (financially, emotionally and time wise). For this reason we still haven’t gotten as much planned and ready for parenthood and baby as we had hoped we would by our 6th month. I suspect we aren’t alone in this. I did manage to get my registries done. Well, they aren’t complete, however, they are up and mostly done. There were some items that we wanted to research a little better: infant seat, stroller and video monitor. They seem to be bigger ticket prices so we wanted to make sure we go for what is best, practical and not unnecessarily priced. Basically, seeing what is worth the extra cost and what is just a name brand that over charges. It is unbelievable how expensive it all is, and who even knows what we will really need!

Baby has been moving around much more frequently which usually brings a smile to my face, even if I am startled. I like the idea that he is an active guy in there, as long as he isn’t moving because of something I did…. like eat something he doesn’t like or gulp down a bunch of cold stuff that he can feel and gives him the shivers! He has been making more room on my insides lately too. According to my book he is only about 2 pounds or a bit over that which means he has lots of growing to do. Right now, my belly doesn’t really get in my way. It is a bit harder to get up from bed or the couch, mostly just because the right side sciatic nerve pinches when I make certain movements. So far- my least favorite feature of growing a little baby it isn’t that bad.

Here is my photo for week 26. And since today is Sunday already, I think we are going to miss week 27. Kris has been working late on the Plumas house so I was usually in PJ’s by the time he would make it home. I am glad I bought some maternity shirts. I think they will last for most of the next 3 months and will also be comfortable shirts to wear for a little while after delivery. 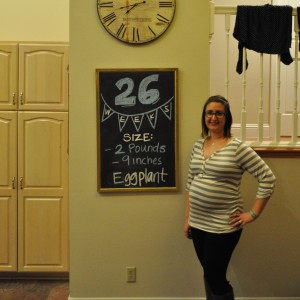